Women advised not to use sex as tool of punishment 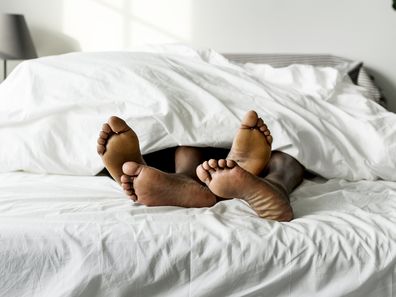 Male participants at a woman empowerment programme at Charia have called on women to stop using sex as a tool of punish­ment in getting their griev­ances addressed.

“If there are issues, we need to talk it over imme­diately but this is not so no; now when it is time to have six, that is when you will see the woman in a tight fitting shorts or jeans because they have issues with us”, Mr Ama­du Sule, a male participant said this at a programme.

He indicated that some men had less reasoning power at that instance and could tell lies and make empty promises just to cool down the women and have their way through.

“Well, if you want to resort to that means, you will realise that most of the prom­ises we will make at that in­stant will be fake not true so, we should have concrete time to resolve our issues but not during that critical moment”, he stressed.

The men expressed their worries at the event last weekend when they were asked to support the women in the home and stop abusing them.

Another male participant lamented that women who resorted to placing embargo on sex to get their grievances addressed, sometimes refused their husbands sex for days thus compelling the men to look outside their matrimonial homes for another satisfac­tion.

“Will she now turn round and blame me for breaking the home or abusing her when I find delight in the woman outside than the one at home? why not just talk out issues at the right time and get them addressed so that we will be at peace rather than wearing jeans to bed to register your displeasure on an issue”, he queried.

He advised the women to be humble and submissive so that there would be peace and harmony at home for the man to willingly support them to thrive.

Ms Catherine Amissah, Head of Programmes of the ProNet North, the non-govern­mental organisation which or­ganised the programme, also encouraged women to respect their husbands.

“Most men have the per­ception that if women are empowered, they will use the power to abuse them and cause them to suffer so if you do this even when you have not been liberated, how will the man be convinced to give you the power you require”, she asked.

She explained that the aim of the meeting was to appeal to men to share the domestic burden of women to allow them (women) extra time for other activities that would be economically viable.

She lamented that the amount of work on women had made it impossible for some of them to make time to develop and acquire skills that would make them less dependent on men.

“We are not inciting women against men but we are rather saying that women are equally humans who can put their abilities to use; earn an income and support the home, too, so that the burden on men is reduced,” she said.

Ms Amissah encouraged the men to initiate change by treating their daughters as equally as their sons and give them the same opportunities to education and career ac­quisition for both to become more useful in society and resilient to abuse.#