‘Women attain positions on merit, not through sexual favours’ 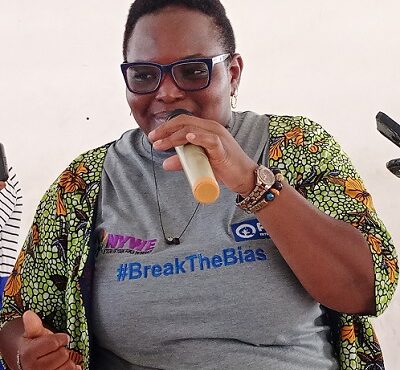 It is disheartening to hear some men shamelessly tagging women in responsible positions as using their bodies to get to the top of their field or career.

“Women are also capable, women have skills, women have abilities so stop tagging every successful woman as having used her body to have reached her current positions, we don’t use our bodies, we use our brains”

The Chairperson of Network for Young Women Empowerment, Ms Ida Nakkar said these in an interaction with The Spectator Newspaper on the sidelines of a women empowerment programme at Wa last Saturday.

The programme was to project women as “necessary component of development and encourage society to do away with biases that affected the progress of women.”

The Chairperson who seemed appalled by such comments against successful women in society indicated that negative comments discouraged women from working harder towards national and human resource development.

“There are a lot of women who are capable of and interested in assuming political positions for instance but once the call is placed, they do not avail themselves because of the unwarranted name calling that come with assuming such positions”, she lamented.

She explained that the situation was compounded in instances where the women were unmarried and said some of them were even called all sorts of names that seemed to suggest that they attained their successes through sexual relations.

“We even hear people tag unmarried successful business women as witches and prostitutes and try to belittle their achievements and capabilities because they are not married”, she said and condemned such acts against women.

The Chairperson explained that in order for women to progress and remain empowered, it was necessary for society to recognise their unique capabilities and talents.

“It is really difficult as a woman to make it to the top because aside dealing with domestic issues that consume your time, you have to deal also with rumours that kill your energy”, she said.

She called on society to consider women capable people who had the ability to reason for themselves and make concrete decisions on issues and give them opportunity to thrive.

“If we think women are not capable, how then are they able to raise children, take care of the home as well as the needs of men; these silent roles that are very important for livelihood are often taken for granted, yet women handle them perfectly so with same managerial skills they can fit into any sector without qualms”, she added.

A dressmaker at the event, Madam Memuna Kipo also encouraged women who had little or no education to endeavour to acquire skills that would help them survive on their own

“I am not educated but I have a skill which gives me income so I want to encourage my colleague females that education is one of the ways to make it in life so if they are unable to access it due to one reason or the other, they should learn a trade and live by it in order to make them beneficial to society”, she stressed.