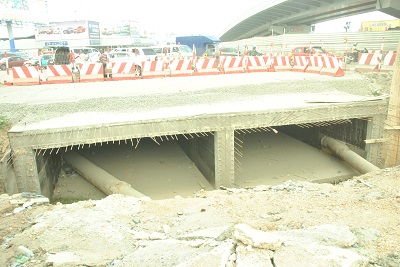 Construction works on the second phase of the Obetsebi-Lamptey Interchange project, which began early this year, is progressing steadily.

The project which stretches towards the Abossey Okai road and Kaneshie would further boost free movement of vehicles, following the inauguration of the first phase in November last year by President Nana Addo Dankwa Akufo-Addo.

In addition to other civil works, storm drains are being constructed to help reduce the perennial flooding in the area. Men and earth moving equipment were seen putting finishing touches to the drain when The Spectator visited the site on Tuesday.

The second phase, according to the contractors QG Construction Limited, involves the construction of a third tier flyover from the Abossey Okai Central Mosque area towards the STC Yard.

He said the second phase would also improve access roads, including the construction of a dual carriage road starting from the Awudome Cemery area.

Commuters are keeping fingers crossed for second phase to also be completed ahead of schedule, just as the first phase was successfully done.