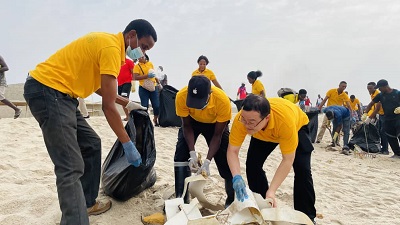 The World Mission Society Church of God (General Pastor Kim Joo-Cheol) organised a clean-up on Sunday to clear the waste at the Pambros Beach at Wiaboman in Accra.

The six-hour exercise saw hundreds of church members cleaning domestic waste which made the beach unattractive for people to patronise.

The Wiaboman beach is known to be inundated with refuse as well as faecal matter due to lack of toilet in the area, resulting in residents visiting the shore to answer the call of nature.

The Ghana Branch Overseer of the World Mission Society of God (General Pastor Kim Joo-Cheol), Mr Kunwoo Song said, the exercise was to protect the beach from waste pollution.

He said the church had over the years undertaken such exercises as a means of spreading the doctrine to communities on the significance of keeping their surroundings clean.

Mr Song said, it was the responsibility of individuals especially Christians to protect nature such as trees, forests, birds and animals and appealed to the people of Wiaboman to keep the beach as neat as possible.

“The church is conducting environmental protection campaigns around the world to commemorate the Passover of the New Covenant, the Feast of God written in the Bible.

“In Ghana it is people from Pambros and Weija with support from the local communities who willingly joined the campaign,” he said.

Mr Song explained that, the Passover of the new covenant, which was the background of the volunteer service, was the day God promised eternal life to mankind.

The Assembly Member of McCarthy South Electoral Area, Mr Clement Agyei said, although there had been several clean-ups at Pambros Beach, residents kept on dumping refuse, disposing faecal or attending to call of nature call there.

He said another worrying situation causing threat to the beach was the setting up of structures closer to it, stressing that despite several warnings residents continued to build closer to the shore.

Mr Agyei thanked the church for cleaning the beach, and called on stakeholders to take action against those putting up illegal structures at the shore.