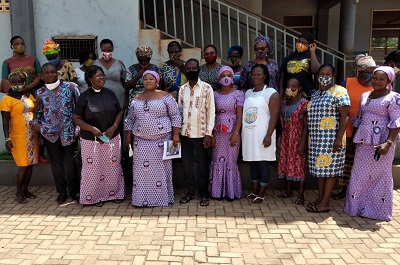 Eleven widows  who  belonged to a group known as “The Dorcas Project”  from the Lapaz  District of the Evangelical Presbyterian Church,  have received skills  training  in bread baking, pastries, soap and beads preparation in Accra.

The  skills training  which was held at the River Rose School, Tantra  Hill,  Accra, was aimed  at empowering   the beneficiaries, who belonged to the “The Dorcas Project” to become economically independent, concentrate on caring for their children, and stop thinking about the loss of their husbands.

Rev Mrs Nyuieme Adiepena, the National Women’s Programme Officer of the West Volta Women’s Fellowship (WVWF), who was In- charge of the programme, said  in an interview with The Spectator  that the training  was facilitated by the  All African Conference of Churches( AACC),  Widows Fund .

She said the AACC was glad to sponsor the ” The Dorcas  Project”,  having  considered the economic hardship members were going through.

Rev Adiepena said the sponsorship package included the equipment the trainees would work with,  to eradicate the difficulty of  mobilising  capital to start on their own.

She was of the hope that the beneficiaries would take keen interest in the various skills they were taught and make maximum benefits out of them.

Rev Adiepena lauded the initiative of the stakeholders of ” The Dorcas  Project,” adding that it would ease the burden of the beneficiaries.

The President of the West Volta Women’s Fellowship, Presbyter  Mrs Naomi Jiagge,  described the training as good since it would ease the burden of the women involved and assured that the fellowship would continue to pray for their success.

Ms Doris Ofori, one of the trainees said she and some of her colleagues had started preparing liquid soap for sale.

She intimated that they had planned to come together to bake bread for sale at affordable prices to  school children  when school re-opens, adding  that they remained grateful to the facilitators of the programme.

“The Dorcas Project”  was established in the Evangelical Presbyterian Church in the Lapaz District of Accra by a group of stakeholders, led by Rev (Mrs) Davida Matti- Atakpah  in June 2019.

It commenced with 10 widows and four widowers, with the aim of helping them to ease  emotional and psychological pains endured , and  stigmatisation they encountered as a result of some socio- cultural practices.

Rev Matti-Atakpah said she later discovered that some of them needed financial support to enable them to cater for their families and  perform other social duties, hence the  need to provide them with employable skills.

She was grateful to Rev Adiepena through whose initiative  the group had acquired the support from the (AACC) Widow’s Fund .