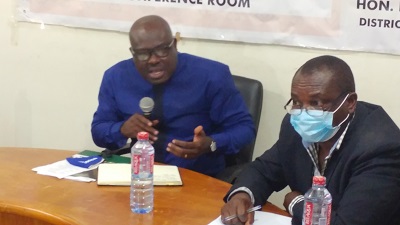 The Shai Osudoku District Assembly in the Greater Accra Region would not forcibly take over anyone’s land for the construction of the Dodowa market.

However, any family or individual whose property falls within the construction zone and have valid proof of ownership would be adequately compensated, the District Chief Executive (DCE), Daniel Akuffo, has said.

According to him, “Ghana has both statutory and customary land tenure systems that run together, adding Article 267 of the 1992 Constitution makes it clear that chiefs and family heads are the custodians of such lands and have authority to enforce right and obligation to any land that has been granted”.

Mr Akuffo said these at a media briefing on Thursday at Dodowa to highlight the assembly’s position on the re-construction of the Dodowa market following media reports that the assembly has forcibly taken over land belonging to the people to construct the market.

The assembly, he explained shall, under no circumstance deny any rightful owner of a piece of land in the Dodowa market.

Mr Akuffo stated that payments of compensation cannot be made unless all the processes were exhausted and all encumbrances cleared for the compulsory acquisition of the site measuring 16.680 acres pending the issuance of the Executive Instrument (EI) by government for the payment of the compensation.

The DCE said funding had been secured to transform the aged market into a modern one that would serve the interest of the people, as such this opportunity must not be lost.

He therefore advised those peddling falsehood and hoisting red flags around the market to desist from such acts and submit their documents for processes of verification and payment to begin.

Mr Akuffo also denied any knowledge about crop compensation but promised to pay when the right documents were presented.

“All temporal permits issued for container placement has been revoked and stressing that no money has been collected by the assembly for stores allocation on the yet to be constructed market,” he added.

Mr Akuffo urged property owners to stop engaging criminals as land guards and warned that anyone caught would not be spared adding, “no one would be allowed to use personal interest to disturb the peace the area was enjoying.