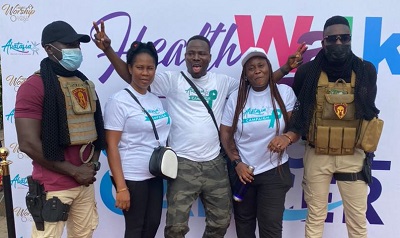 She noted that women should at least once in a year walk to any medical facility to do the Human papillomavirus (HPV) test.

“We are all at risk, every woman who is sexually active needs to go for the test to know her status,” she said.

Speaking to The Spectator, the brain behind the event, Mrs. Nettey, said aside the campaign against cervical cancer, the walk which was attended by gospel musicians and people from different sectors of the society was for networking and socialization.

Women in Worship is in its 5th year, and as part of activities leading to the year’s edition, they embarked on a health walk for cervical cancer awareness campaign.

The walk started at the University of Professional Studies campus and ended at the Presbyterian Boys School astro turf.

This was followed with an aerobics session which saw patrons of the event show their agility and stamina on the turf.

This year’s edition is on the theme, “The Grace Experience” which signifies the grace of God for a glorious anniversary slated for Sunday September 19, 2021.