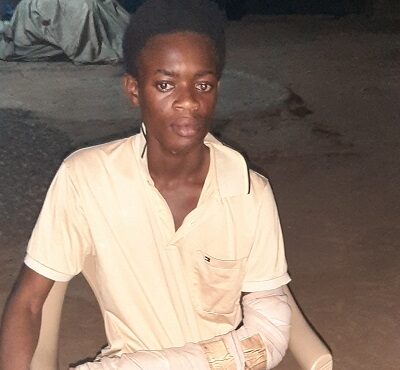 A chinese business man and Managing Director of King of Lion Wire Mesh Weaving Industries at Medie, Samsam junction, in the Ga West Municipality of the Greater Accra Region, Mr. Zhang Yi, is said to have abondoned a severely injured worker to his fate.

After paying the initial hospital bill of GH¢1,000 for the victim, he refused to foot the additional bill of GH¢5,700 to enable him (victim) undergo surgery at the hospital.

The injured worker, Desmond Afanyo, 20, in an interview with “The Spectator” on Monday, said he fell from a dizzying height of the factory on February 16, 2021, on the hard concrete floor while packing finished products, resulting in a fractured left arm.

He said he was rushed to the Nsawam Government Hospital by the company manager, Mr. King Gadzekpo, where he was treated and later referred to the Grace Ville Hospital for surgery but Mr. Zhang Yi refused to pay the GH¢5,700 bill for the surgery to be performed.

The victim, who is an orphan, as he had lost both parents said he was asked by Mr. Zhang Yi to go to the 37 Military Hospital at his own expense and later submit the medical bills for reimbursement.

He said as some one earning only GH¢550 a month from the company, he could never ever afford the cost of surgery and treatment at the 37 Military Hospital so his fractured arm has been left to rot .

When this reporter went to Mr. Zhang Yi on Tuesday to ascertain the veracity of the story, he confirmed, saying that he had done his part and that the failure of Desmond Afanyo to go to the 37 hospital promptly for treatment, meant he was on his own.

But after a lot of engagement with this reporter, Mr. Zhang Yi reluctantly agreed to bear the cost of Desmond Afanyo’s treatment at the 37 Military Hospital.

A Senior Government Labour Officer at the Ministry of Works and Housing confirmed that, Mr. Afanyo made a report to them two weeks ago.

She said Mr. Zhang Yi’s numerous cases of mistreatment of his workers had become a matter of concern to them, adding that, they would do all in their power to seek justice for the affected workers.

She opined that, no Ghanaian businesman or woman working in China would be allowed to treat chinese workers that way by the chinese government.