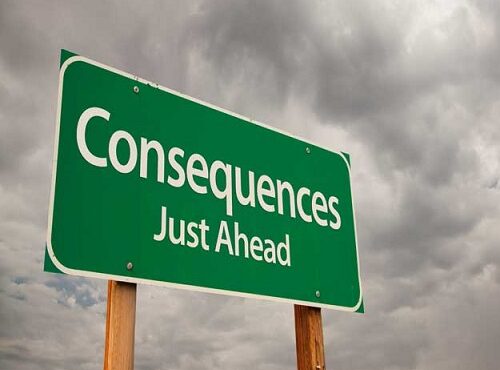 It is Robert Ingersoll who wrote, “In nature there are neither rewards nor punishments, there are consequences.” One of the best known of nature’s consequences is the law of the harvest. As we sow so shall we reap. For some reason we as people are more willing to accept this law as it applies to plants and animals than to human nature. We spend time trying to beat the system rather than succeed within it.

Too often we hope for good health without following the lifestyle that can bring it. We pray for prosperity but practise poor money management. We envy great talent but forget the years of training that developed it.

Perhaps we don’t believe that natural laws operate in human affairs. It is easy to become cynical today when we see and read of people breaking laws apparently with impunity, laws which most of mankind have held as natural and needed for civilised society.

But, as Jacques Maritain wrote, “All this proves nothing against natural law any more than a mistake in addition proves anything against arithmetic.”

Natural and divinely enunciated laws do exist, and as Cecil B. DeMille said, “We cannot break the Ten Commandments, we can only break ourselves against them.”

Perhaps nowhere is the law of cause and effect more misunderstood and misapplied than in our pursuit of happiness. So often we forget that happiness is not a cause, it is an effect, the result of selfless service to others.

And the unhappiest people are those who demand that the world give them power and pleasure. They may temporarily satisfy their self-centred needs, but the natural law decrees that they will thus corrode their character and lose the very happiness they seek.

The peacemakers and the pure in heart, however, may be buffeted by the world, but if they endure it well, they will develop godlike characteristics which will bring them love and joy in this life and happiness in the eternities yet to come.

Sometimes the question is asked: Just how effective is the threat of punishment in keeping men from doing things they shouldn’t do? To this, we must frankly answer that often the mere threat of punishment doesn’t seem to be very effective—perhaps because so many men are apparently willing to gamble on the chance of avoiding punishment for their errors.

In contemplating some misdeed, they often weigh the supposed pleasures against the possible penalties, and then they weigh the chances of escaping the penalties and act accordingly. Especially would it seem that punishments which are postponed to a remote hereafter are often not very effective in causing men to give up the error of their ways.

Heaven sometimes seems so far away and what seems far away may hold little fear for the present. But quite apart from the prospect of remote punishment, it would be well to consider the absolute certainty of immediate punishment.

If we do something we shouldn’t do, even if no one else knows it, the gnawing accusation inside is one form of immediate and unavoidable punishment. The accusation of others is only intermittent, but our own inward accusation can be constant. There may be those who we may think have done some misdeed or participated in some malpractice without punishment, but if we think so, it is only because we don’t know what goes on inside them.

There is no misdeed which does not exact its own penalty. There is no kind of malpractice, the consequences of which are reserved wholly for the hereafter. We may gamble on outsmarting the law; we may gamble on the seeming remoteness of heaven and the hereafter; we may gamble on the leniency of men and the mercy of God, but there is nothing more certain in this world than the certainty that every thought and act of our lives has its impact upon us, whether it is known to others or not, and anyone who gambles against this fact has already lost his gamble.