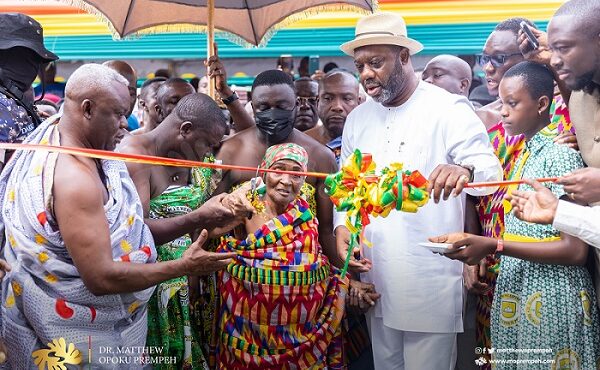 At a time that some Members of Parliament (MPs) are going through a huge crisis because of the disconnect between them and their constituents, one MP who is enjoying a peaceful relationship and an unflinching support from his area is the MP for Manhyia South Constituency, Dr. Matthew Opoku Prempeh.

There is a strong bond between the MP and the Manhyia Palace as well as the electorate because of his unique posture of seeing himself as the servant of the people as he consults and listens to them always.

Napo, as Dr. Prempeh is affectionately called, has delivered so well that it does not surprise the people of Manhyia South to wake up in the morning to see another development project commencing.

The 200-seater edifice boasts of free wifi, 36 computers and other modern amenities to promote easy learning by students and the public.

The one-storey library project has been stocked with some 10,000 books for its patrons, especially students, to study and acquire new knowledge.

The decision by Dr. Prempeh to honour the late Ashanti Queen posthumously was to appreciate the key roles she played in promoting education in the Ashanti Region and beyond during her reign.

The MP, who is also a former education minister, during the commission of the project, said that he decided, together with the people of the area, to name the library after the late Queen to honour her for her good works for the country and also to motivate others to emulate her.

Napo, who is a royal from Apagyafie, entreated the youth of the area and Kumasi to constantly visit the library and add to their knowledge, adding it was only through education that the gap between the rich and the poor in society could be narrowed.

The land for the project was provided by the Asantehene. Otumfuo Osei Tutu II, who is the first born of the late Nana Afia Kobi Ampem II.

Traditional rulers who were present at the event at the behest of the Manhyia Palace were full of praises to Dr. Prempeh for his understanding of the importance of education and his readiness to promote same in the area.

What is more striking is the fact that at no point did Dr. Prempeh mention the quantum of money spent on the project in honour of the late Ashanti Queen.

Mindful of the role of the youth in development, Dr. Prempeh, in June this year, rolled out a youth entrepreneurship empowerment project in the constituency to tackle youth unemployment by equipping them with the needed training skills to employ themselves and their families.

The project, dubbed “Reducing unemployment through skills training,’’ in partnership with the College of Beauty and Arts and Entrepreneurship (CBAE), started on June 27, this year.

Some 80 trainees selected from the six electoral areas within the Manhyia South Constituency have been equipped in Make-Up Artistry, Beauty Technology and Fashion Design Technology training for seven weeks.

What is unique is that Dr. Prempeh took care of all the equipment needed for the seven weeks’ training programme and start-up equipment, as well.

The youth of Manhyia South who were enthused about the magnanimity of the MP have vowed to take advantage of the skills training agenda and start up their own businesses.

The Chief of Kokoso, in the Ashanti Region, Nana Kwaku Duah, who was at the launch of the programme, advised the youth to embrace the opportunity with a high sense of seriousness for the betterment of their future.

Nana Kwaku Duah would not stop praising Dr. Prempeh for empowering the youth of Manhyia South, saying: “The electorate will always remember him for his good works.”

One thing that makes the people happy is the fact that their MP does not singlehandedly decide the kind of projects they should have, rather, he involves the people to take decisions on what would inure to their collective benefit.

Dr. Prempeh, who is the current energy minister, in his own way since becoming the MP for Manhyia South, has delivered beyond expectation and it is not out of nothing that the chiefs, opinion leaders, school children and the youth across the political divide see him as a trustworthy servant of the area.