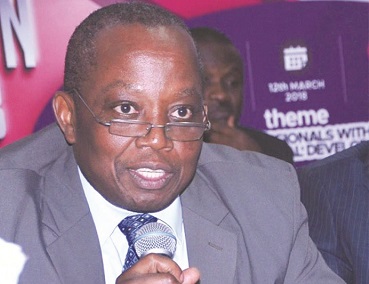 The Ghana National Gas Company Limited (Ghana Gas) and four other entities have failed to pay a total of US$310.34 million into the Petroleum Holding Fund, the Auditor General (A-G), Mr Daniel Yaw Domelevo, has said in his report to Parliament.

The A-G report was on the management of petroleum funds for the financial year ended December 31, 2018.

According to the report, Ghana Gas owed US$308.77 million for gas supplied by the Ghana National Petroleum Corporation (GNPC).

The A-G estimated the amount of penalties due from the default to be US$10.79 million as per section 3(4) of the Petroleum Revenue Management ACT 2011 (Act 815).

Section 3 subsection 4 of Act 815 states, “where the liability of an entity to make a payment is not discharged on or before the due date, the entity shall pay as a penalty, an additional five per cent of the original amount for each day of default or the default rate established under any other law, whichever is higher.”

The implication of the failure of Ghana Gas and the four other entities, the A-G said, had led to loss of income to the state, a situation which could have been averted through prompt payment.

“There is a loss of income which would have been earned, if the funds had been paid on time and invested,” Mr Domelevo said in his report.

Against the background of the findings from the audit conducted, the A-G recommended that all monies assessed as due and outstanding to the Petroleum Holding Fund should be promptly collected.

In addition, the A-G endorsed that, any late payments should attract the right interest as stipulated by Section 3(4) of Act 815.

The report also found that, the Investment Advisory Committee of the Petroleum Fund Management was not meeting, as Act 815 requires.

Per Act 815, the Investment Advisory Committee was supposed to meet at least once every quarter, but that did not happen, according to the report by the A-G.

“We were unable to confirm that the IAC met during the year ended December 31, 2018, as there were no minutes available in line with Section 33 of Act 815,” the A-G said.

To this effect, Mr Domelevo recommended that, the IAC should be reconstituted with individuals who can make time to regularly attend to the business of the Committee.

The report, presented to Parliament in accordance with Regulation 29(7) of the C.I.70, was undertaken by PriceWaterHouseCoopers for and on behalf of the Auditor-General.