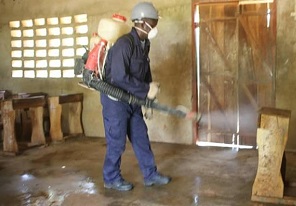 The disinfecting of basic schools in the Savannah Region would help assuage fears in both the pupils and the teachers in the region as a result of the coronavirus disease.

With the disinfection exercise in the Savannah Region underway, both the final-year JHS pupils and teachers would be motivated and have confidence to report to school on June 29, to prepare for this year’s Basic Education Certificate Examinations (BECE), he said.

In this regard, he commended Zoomlion Ghana Limited for partnering the central government to have all basic schools in the country disinfected.

According to Mr Dramani, many of the teachers and pupils became even more excited when they got wind of the news that Zoomlion was coming to disinfect basic schools in the region.

Zoomlion, he indicated, started the exercise on June 18, adding that they have been able to disinfect about 74 basic schools out of 112 in the district.

He also said that the ministry of education was putting in place measures to help protect the final-year JHS pupils against the COVID-19 disease.

Consequently, he cautioned the final-year pupils to adhere strictly to the President’s directives on the COVID-19 pandemic.

In the view of Mr Dramani, the e-learning approach adopted by many of the schools in the region did not have much impact.

He attributed this to the fact that many of the pupils and their parents did not have the necessary tools to support e-learning.

He, thus, advised the pupils to fully cooperate with their teachers throughout the period they will be studying to write their final year examinations.

Meanwhile, heads of basic schools in the region were happy with the disinfection exercise in their schools.

According to them, the exercise was critical because it would not only keep their schools’ spaces and facilities safe, but equally protect their final-year JHS pupils to prepare and write their exit examinations, safe from the virus.

The headmaster of Larabanga JHS B, Mr Saaka Dauda Laward, could not hide his joy, and thus praised the government and Zoomlion for the exercise.

“I am very excited to see the government engage Zoomlion to disinfect my school,” he expressed.

He used the opportunity to appeal to philanthropists and corporate institutions in the region to support his school with Veronica buckets, nose masks and alcohol-based hand sanitisers.