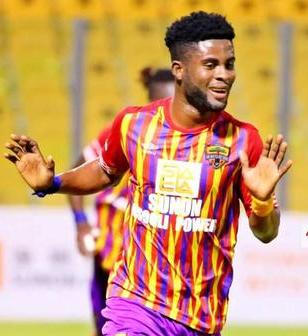 The 2020/2021 Ghana Premier League (GPL) winners Accra Hearts of Oak will be chasing a double when they clash with AshantiGold in the grand finale of this season’s MTN FA Cup tomorrow at the Accra Sports Stadium.
The Phobians would be beaming with confidence as their home venue hosts the final with fans expected to troop to the stadium to cheer the club to another victory.
Hearts also go into the game with the record of the most successful club in the history of the FA Cup with 10 titles as against AshantiGold who only won the competition in 1993.
The Phobians have enjoyed an incredible season and arguably the best team in the country at the moment – are favourites for the FA Cup trophy.
Their resilience showed in the thumping of Medeama in the semi final and are expected to display their outstanding rhythm against their Sunday opponents.
Though AshantiGold also displayed their scoring prowess in their 4-1 extra time victory in the semi finals against Berekum Chelsea, Hearts appear to be the more organised side going into the encounter.
The likes of Daniel Afriyie Barnie, Raddy Ovouka, Benjamin Afutu, Salifu Ibrahim and Emmanuel Nettey would be the key players to ‘do the damage’ for Hearts. Coach Samuel Boadu and his technical team would also be in battle at the touchline, guiding the team to another victory.
AshantiGold, however, will be a hard nut to crack as they would be chasing the trophy for nearly two decades.
The Obuasi side are also chasing CAF Confederations Cup next season and the FA Cup will would be a huge case for the club.
The likes of Eric Esso, David Abagna and Seth Osei would be making things tick for AshantiGold with their usual threat to the backline of their opponents.
Fans from Obuasi would also travel to the capital to witness the finals and support their team to victory.
It promises to be an exciting game as both teams appear to be in good shape and would give fans a lot to cheer about in their quest to win the prestigious MTN FA Cup trophy.