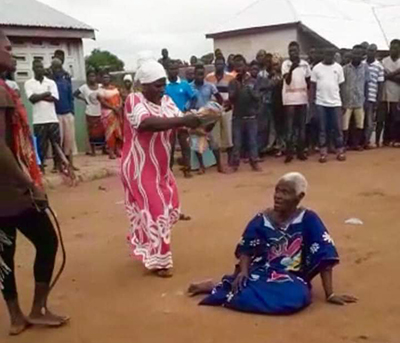 The Inspector-General of Police (IGP) Mr. James Oppong-Boanuh on Saturday July, 25, 2020 dispatched homicide experts from the National Police headquarters to the Savannah region, to help search for the murderers of Madam Akua Denteh.

Madam Akua Denteh aged 90 years, was beaten to death at Kafaba near Salaga in the East Gonja District for allegedly being a witch.

The suspects, believed to have fled the town include one Sanjo, who is said to have hosted Hajia Filina, a priestess who declared the deceased a witch.

Others are: the priestess, Hajia Filina, one Teacher Aliu, Bumaye, Ashley, and Manafo.

The IGP has announced a two thousand Ghana Cedis (Gh₵2,000) reward for information leading to the arrest of any of the suspects.

According to the Police Administration, they condemn mob justice in any form and assures the public that it will fish out perpetrators of this heinous crime.