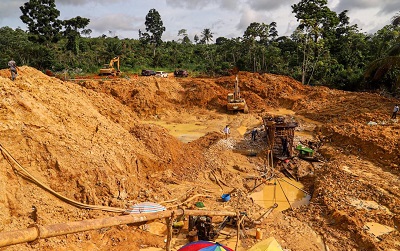 Officials from the Ministry of Lands and Natural Resources, on Tuesday, confiscated eight excavators and mining-related equipment at some illegal mining sites in Tugakrom in the Suaman District of the Western North Region.

Other mining equipment at some of the sites were burnt by the national security operatives on the orders of the Minister, Kwaku Asomah-Cheremeh, who led the operation.

This was after the team, including military personnel undertook enforcement exercise in the area, which has seen about 100 acres of land destroyed by activities of illegal mining.

The visibly angry minister could not hide his disappointment at the District Chief Executive (DCE) of Suaman, Mr Christian Baah, and the District Police Commander, Theophilus Boateng, for failing to halt illegal mining in the area.

Addressing journalists, Mr Asomah-Cheremeh, said, the DCE and the police commander conspicuously failed to protect some nine excavators seized from illegal miners earlier this year in the area.

He said that the seized excavators were placed in the custody of the DCE and the District Police Commander.

However, when the minister returned later, some major parts of the excavators were missing, thus, making it impossible to transport them.

Eight of the seized excavators, he said, were found on illegal mining sites at Tugakrom on Tuesday during the enforcement operation, a situation which compelled the minister to chide the local authorities.

The actions of the DCE and the District Police Commander, he said, would be communicated to President Nana Addo Dankwa Akufo-Addo for possible disciplinary actions.

Mr Cheremeh called on Metropolitan, Municipal and District Assemblies (MMDAs) to support government in the fight against illegal mining, and to protect the country’s vegetative cover and water bodies from grittier degradation.

He encouraged indigenes of mining communities to rightfully acquire into small-scale mining licences for their mining activities.