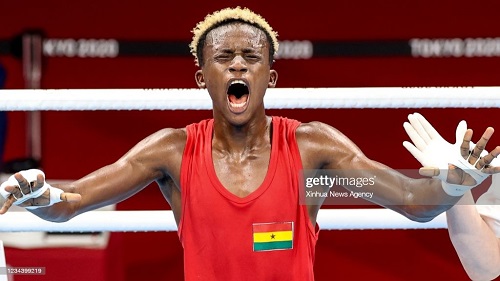 To the cavilers, Ghana’s campaign at the Tokyo Olympic Games was disastrous. To others, it was a cameo suggesting there is great future ahead.

Amid a typhoon-like Covid pandemic that ruthlessly swept its anger across the world – killing thousands – and destroying livelihoods, Japan’s capital Tokyo, still proceeded to welcome some 11,500 passion-driven athletes to the Games.

So, after the hustles and bustles of intense chase, 14 athletes from Ghana were able to make the Olympic qualification nark – swaggering into a quadrennial event that has not given the nation a medal since 1992 in Barcelona, Spain, when the Black Meteors clinched what was Africa’s first medal (bronze) in football.

Again, for 49 years, no single individual sport has given the nation a medal.
Truth is that expectation of a medal from Tokyo was deemed almost a distant possibility. Even the biggest optimist doubted for once – reason being that preparation was woefully inadequate.

However, captain of Ghana’s amateur boxing team (Black Bombers), Sulemana Tetteh, on July 26 offered the nation the biggest hope as he won his first bout – silently knocking off any lingering doubt of a medal fiasco in Tokyo.

But two days later, Ghana’s representative in judoka Sensei Anani Kwadjo was swatted aside in the 90kg event. It was a learning curve for the 21-year-old who bowed to a more experienced South Korean.

On the same night, the unheralded Samuel Takyi wrapped up a unanimous 5-0 win against Ecuador’s Caicedo Pachito in his opening featherweight contest.

Sadly, the joy that greeted Takyi’s victory was to evaporate with humiliating rapidity few hours later when light heavyweight Shakur Samed was technically stopped by his Turkish opponent Bayram Malkan. It was a humbling experience too for the loser whose siblings were also ‘medal-less’ at the 2008 Beijing Olympics.

Come July 29, Ghana’s finest swimmer Abeiku Jackson, finished first in the 100m men’s butterfly. Many Ghanaians cart-wheeled into celebration only to be told that his time of 53:39, was not enough to see him into the semi-final stage. All the same, it was a great performance, and a corking one for the future. A day later, though, Abeiku’s swimming compatriot Unilez Takyi – placed last in the women’s 50m freestyle event. No comment on that one.

Perhaps, the most bewildering performance came from Nadia Eke in the triple jump – recording no jumps in all three attempts. It was limpidly clear she was not ready for the event; maybe, just happy to have tasted Olympics.
Little wonder, Eke was quick to announce her retirement soon after her failure.

On Saturday, July 31, Benjamin Azamati surprised many Ghanaians after placing fourth during heat 7 of the 100m race, recording 10.13 secs. Winner of that heat was Australia’s Rohan Browning. He was tipped to do far better.

Azamati made history by breaking a 22-year national record held by Leo Myles Mills on March 26, 2021 in Texas, USA, by clocking 9.97 seconds to qualify for the Tokyo and many he could reenact that performance. He blames his Tokyo performance to stage fright. Well, he is a huge potential.

On same day, Christian Amoah slumped badly in weightlifting, attributing his bad output to an injury he sustained earlier. It looks like he had seen his last Olympics, having tasted the previous one in Rio, Brazil.

After bouts of bitter-sweet recordings, the biggest joy popped up like champagne in the early hours of August 1 when Takyi decisioned his opponent 3-2 and hopped into the medal zone – basically giving Ghana its first boxing medal (bronze) since Prince Amartey in Munich ’72. A 49-year-old demon was effectively exorcised by the 21-year-old lad who has proven to be a huge revelation in Tokyo.

On July 3, Takyi attempted to box his way beyond his bronze feat but crashed 1-4 to the more experienced United States’ Duke Ragan.

The defeat, notwithstanding, the former ‘truck pusher’ has written his name in the hearts of Ghanaians. He was the biggest thing that happened to Ghana in Tokyo – and must be hugely celebrated when the contingent returns home.
Any hope for the sprints? Well, Sprinter Joseph Paul Amoah finished third in heat 7 to cruise into the semis but subsequently failed to make the final cut later.

But when it all appeared that athletics was not going to make any big impression, Ghana’s 4x100m men’s quartet qualified for the Olympic finals with a new national record of 38.08 secs. As of press time, the team was preparing to dash for the medal race. Who knows it might be another medal for Ghana? And, that would have been awesome!

Having said that, the total performance of our contingent indicated that we could have done better if we had prepared well. It was no Covid issue. We failed to invest in our preparations and the upshot was exactly what we reaped.

We must be extremely lucky to be returning with something, courtesy Takyi! He saved the nation’s Olympic blushes!