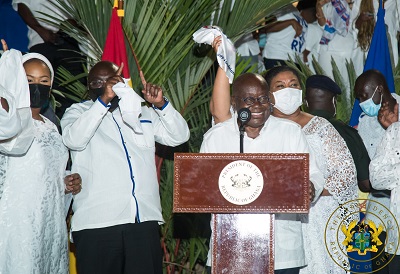 Many Ghanaians who were on tenterhooks following the delay in the declaration of the winner of the presidential elections suddenly heaved a sigh of relief when the Electoral Commissioner, Mrs. Jean Mensa finally declared NanaAddo Dankwa Akufo-Addo as winner of the keenly contested poll.

This created a peaceful atmosphere for members, supporters and sympathisers of the winning New Patriotic Party (NPP) to inundate the streets and corners of Accra and other parts of the country in party colours with spontaneous jubilation to the glory of God and the success of the party.

The declaration suddenly deflated the tensed atmosphere which had engulfed the nation for 48 hours after the close of polls on Monday December 7, with the two major political parties, the New Patriotic Party (NPP) and the National Democratic Congress (NDC) claiming victory ahead of the Electoral Commission’s (EC) final declaration.

Many people celebrated late into the night drinking and dancing on the streets and in the bars. Young men and women in groups rode motorbikes like swarm of bees on the streets of Accra amidst loud noise from the engines of their motorbikes in celebration of the victory.

Massive traffic was recorded in some parts of the city but drivers and passengers appeared unperturbed. While some drivers cheered in the traffic, others tooted horns from their vehicles and waved NPP flags

At the Nima residence of President Akufo-Addo was a large crowd of supporters chanting victory songs and throwing fireworks. Security personnel at the residence had a hard time controlling the jubilant supporters.

President Akufo-Addo, in his victory speech, stressed the need for all Ghanaians, irrespective of their political affiliation, to join the struggle of building a progressive and prosperous country for all.

“The period of campaigning is over. The outcome of the election has been established. The Ghanaian people have made it loud and clear that the two parties, the NPP and the NDC must work together in Parliament for the good of the country.

“Now is the time for each and every one of us, irrespective of our political affiliation to unite, join hands, stand shoulder to shoulder and work hard to put Ghana where it deserves to be,” the President said.

He pledged to dedicate his second term of office as President to work harder and build a prosperous and progressive country to justify the confidence reposed in him by Ghanaians.

President Akufo-Addo said he was humbled by the show of confidence by Ghanaians and indicated that his victory was a clear indication of the support of Ghanaians for his policies and programmes of social and economic development.

He commended the Chairperson of the Electoral Commission, Mrs Jean Mensa, and all officials at the EC for the sterling performance and urged them to continue that path in future elections.

“The orderly, commendable and peaceful conduct of Ghanaians on election day is to be widely applauded,” he said, and praised the citizenry for strictly adhering to the COVID-19 protocols during the exercise.

He applauded personnel of the security agencies for ensuring peace, law and order during and after the election, and condemned the isolated violent incidents that led to few deaths.