Will the ‘Milo’ be tasty again? 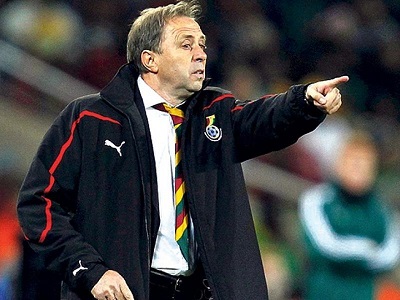 AFTER all the speculation and brouhaha over who is going to succeed CK Akonnor as Black Stars’ chief trainer, the Ghana Football Association (GFA) finally settled on Serbian Milovan Rajevac, on an expectant Friday afternoon.

Many had sat on tenterhooks as to where the next manager would be coming from.  Many names had been bandied around.

But the pendulum was always swinging towards Rajevac, once his identity popped up among a heap of marquee names.

The 67-year-old gaffer initialed a two-year deal with Ghana – having been tasked to break the ‘Stygian silence’ as regards Ghana’s disquieting failure to win the Nations Cup since 1982, as well as qualify for the 2022 FIFA World Cup in Qatar.

Milovan is enjoying a second bite of the cherry. He was first engaged in 2008, first guiding the Local Black Stars to the finals of the Championship of African Nations (CHAN), before spearheading the Stars to the quarter final berth of the FIFA 2010 World Cup, staged in South Africa. In fact, but for Luis Suarez’s deliberate handball incident in the last second of their quarter-final clash against Uruguay, the Stars would have romped into the semis. That would have been some history! African history!

Qualifying for the Qatar quadrennial football festival would be celebrated wildly by Ghanaians. But halting the Nations Cup title drought should unquestionably see an uncontrolled, hysteric jollification and merrymaking.

Indeed, victory at AFCON would have sealed many twists and turns to a dramatic denouement that have seen scores of coaches struggle to break the now 39-year-old debacle.

Milovan’s first hurdle, however, is to put back on track the nation’s World Cup qualification ambitions as he tries to assemble a compellingly winsome team against Zimbabwe (Saturday, October 9) in next month’s double header at the Cape Coast Sports Stadium and in Harare (Monday, October 11).

Somehow, the Serbian managed to waltz his way into the hearts of Ghanaians during his first romance (2008-2010) – but that tenderness would come with a lot of anticipation – which must be supported by the FA.

It was revealed that the immediate past Stars’ coach Akonnor did not elicit the requisite backing from the FA, especially with regard to player invitation into the national team.  The situation, obviously, would have to change for the better if the ‘Milo’ is going to be charmingly sweet again.

Heartily, the Serbian says he is going to take full responsibility in player selections.  That is good to hear.

In his previous outing, Milovan played a total of 28 games and won 12, drawn same number and lost four – scoring 35 goals and conceding 33. Not a bad record though, but he may have to improve on his concession rate and aim at scoring more.

Though only two games played, the Stars – former World Cup quarter-finalists, have not given any strong indication of making it to the Mundial. They have been very less inspiring and really discomforting in both games against Ethiopia and South Africa, selling out some rambling football of indignity to the world. That was what precipitated the exit of Akonnor.

On October 9 when they take on the Warriors of Zimbabwe, Ghanaians would expect to see a polished Black Stars that play with bountiful flair, panache and such ruthless intensity in attack.

Of course, nobody needs to tell Milo to invite players who are busy for their teams; not bench warmers, not pretenders, not those who are eager to pay money for their spot – but rather, quality actors who are prepared to give their all for the result! That is the only way Milo could make his second coming tastefully memorable again.