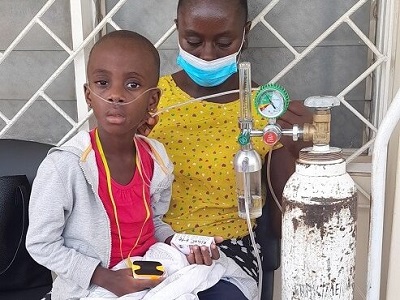 The parents of the four-year-old girl living on oxygen at Koforidua have heaved a partial sigh of relief as the Koforidua Central Hospital has taken upon itself to bear half of the cost of the oxygen needed daily by Elita Asare Jnr, to survive.

The plight of Elita coupled with the appeal by her parents for support in diverse ways from institutions and individuals, was published by this paper two weeks ago.

This publication has engendered some quick responses from good-natured people who have made some cash donations in support of the ailing little girl who needs such generous offers to survive.

Moved by the plight of the little girl, the Medical Director of the hospital, Dr Arko Akoto-Ampaw said,“the hospital will take half of the cost till she gets her own oxygen concentrator.”

She said that, the hospital had already given the parents two cylinders to be used for refilling and hence would continue to help by taking half of the cost of oxgyen till she got her oxygen concentrator which may cost between Ghc9,000 and GHc10,000.

Meanwhile, a philanthropist, Mr. Fred Amaglo has donated Ghc1,000 to the parents of little Elita to help them get her the oxygen concentrator.

According to him, he was touched by the story of the little girl hence his support and hope that the story would touch other kind hearts to enable her parents to gather the needed money to buy the oxygen concentrator .

The parents of Elita, Mr and Mrs Asare expressed their appreciation to the Koforidua Central Hospital for the gesture.

daughter would get better soon and appealed for more support to enable them to buy the oxygen concentrator for their daughter.

The Spectator, in its edition of Saturday, April 24, 2020, published the story of Elita who was born a pretern at 33 weeks with her twin sister, Elisa, and may have to live on oxygen for either  a long time or for life.

Doctors at the Koforidua Central Hospital diagnosed her of a lung disease that made it difficult for her to breathe.

The only way to help her is to have a lung transplant, but in its absence, she would have to live on oxygen for life.