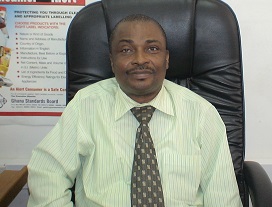 As a Creator, God believes in standards and that explains why all His creations are standards-based, the Director of Corporate Communications at the Ghana Standards Authority (GSA), Dr Kofi Amponsah-Bediako, has said.

He explained that “a look at the planetary system shows that the earth does two things at the same time, namely, rotating and revolving around a defined path.”

“In spite of this, the earth never clashes with other planets in the universe, an indication that God is a great and perfect scientist,” he said.

Dr Amponsah-Bediako was speaking in an interview with The Spectator in connection with last month’s celebration of World Standards Day.

The Director of Corporate Communications pointed out that the earth was a finite vessel of life in the space of the solar system, and that, life on earth depended on energy that came from the sun.

He said, over the years, human and large-scale industrial activities referred to as modern civilisation, had added to the natural greenhouse gases of the earth, and negatively impacting on our climate and all forms of life.

He added that rapid population growth and urbanisation demanded responsible use of limited resources.

Dr Amponsah-Bediako stated that, to reduce human impact on our planet, “we need tried and tested solutions to technical challenges, which help share expertise and technical know-how broadly within developed and developing countries all over the world”.

He said, seen in this way, standards were needed to cover all aspects of energy savings as well as water and air quality.

The theme for this year’s celebration of World Standards Day was, “Protecting the Planet with Standards.”

Dr Amponsah-Bediako said if the earth was not protected as required, lives on it would be adversely affected.

“This is why we are calling on every person in this world to keep to measures that will help protect the earth,” he stressed.

He said, environmental standards should “preserve nature and the environment, help to prevent damage and also repair past damage caused by adverse human activities.”

Dr Amponsah-Bediako said, the strict adherence to environmental standards helped to reduce “the environmental impact of industrial production and process; facilitate the re-use of limited resources and improve energy efficiency.”

He emphasised that, as a nation, we needed to keep to and respect environmental standards in line with God’s will, since standards were administrative regulations implemented for the treatment and maintenance of the environment.

He further said, when we obeyed environmental standards the earth would be protected for the good of all men and women, irrespective of where they found themselves in the world.

World Standards Day is celebrated on October 14, each year to publicise the importance of standards and to honour all those experts throughout the world who have helped to develop and promote standards.