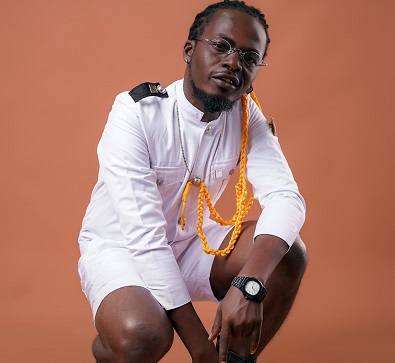 One of Ghana’s best dancehall genii, Kamelyeon has finally broken out of his shell with maiden Extented Play (EP), dubbed ‘Rainbow’.

An Extended Play is often referred to as EP or mini-album is a musical recording that contains more tracks than a single but is usually unqualified as an album.

Speaking to The Spectator during a media listening session held at Oliver Twist Shack at Lartebiokorshie in Accra, Kamelyeon said, chameleon, like rainbow, is full of colours, and for that reason, the EP represents a covenant with his fans that he will never disappoint them.

Kamelyeon added that this EP represented a new phase of his career, and was ready to take his craft to another level to lift the image of Ghana music.

He said that the six-songs EP, was full of stories, and that this accounted for the delay even though he had been in the music circles for long.

ccording to him, the songs gave consolation and encouragement  to people going through problems to never give up.

Others, he said, threw light on social media life of people and the need for tolerance among the fan base of musicians, urging them (fans) to be circumspect in all their endeavours.

Kamelyeon expressed his appreciation to Kofi Akoto of 16th August 85 Villa company for believing in his talent and investing in new project said.

“I wasn’t getting the right people to invest in my talent, and for Kofi Akoto to come in with this support, I am very grateful,” he said.

One of the producers of the album, Fimfim who was at the programme said working with Kamelyeon was a nice collaboration because he knew what he was about.

Ace prodcuer, JMJ, also called on Ghanaians to support Kamelyeon because he was endowed with a lot of talent.

The songs which are available on all music digital stores include, Positive & Negetive, Sm Addict, Mr Pinto,  Party time, Smile, Overflow and Outro.

The likes of Fimfim, Brainy Beatz, Eyor and That Beat God