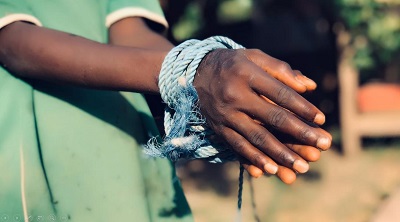 We are once again confronted with the phenomenon of missing children and in some cases adults at a time that we are approaching elections.

Parents must, therefore, be very particular about the going out and the coming in of their children given the modus operandi of the kidnappers who are mostly engaged by the ritual murderers.

When someone is missing and you read a headline ‘Missing Person’, it does not usually elicit the kind of sadness that it would if the person was a close relation or a friend or someone you know in your neighbourhood.

The sadness the relatives of the Takoradi Missing Girls would experience is not the same as what people who have no relations with them would experience.  Anyone who has lost a close relation knows how painful it really feels and it is not something you would want to wish on even your worst enemy.

Those who have never experienced such traumatic events should guard against ever falling victim to such an occurrence.

It is an open secret that ritual murders happen in this country.  The story of Kofi Kyinto that led to the arrest and public execution of Nana Akwasi Agyei of Akaasu near Sefwi Bekwai in the 1980s, is still fresh in my mind.

Stories from people who have been fortunate to escape their wicked acts have revealed the degree of callousness in these ritual murderers and the kidnappers working for them.  There is a story of a gentleman who went to work as an exploration geologist and never returned.  He has never been found since that day.

Colleagues warned me to be careful about my movements when I went to work on one of the mines in the Sefwi area due to this phenomenon.

There have been several reports of people who have been found dead with parts of their bodies missing in various parts of our country confirming the presence and existence of ritual murders and murderers respectively in our country.

The sophistication of the kidnappers gives cause for worry.  They have upped their game and seemed to be focused on young people.  A recent story where a kidnapper disguised as a mad person and chloroformed a 12-year-old young girl is an eye opener to us all.

According to the story, she woke up to find herself on a bus among a lot of children most of them younger than her all asleep being guarded by a certain woman.  She managed to sneak out of the bus when the woman guarding them got out of the minibus when the bus stopped at some point.

What must be brought to the attention of the police and other security agencies is the use of vehicles with tinted glasses.  I believe a law was passed during the PNDC era that outlawed the use of tinted glasses by vehicles due to anticipation of criminal activities that such vehicles are used for.

If this law is in existence, then it must be enforced in order to help stamp out this evil practice.  The police must be given training in detection of chloroformed people in vehicles so that at check points, they will be able to catch kidnappers.

Government agencies like the Ministry of Information, Commission for Civic Education etc. must embark on education of the populace on personal safety.  Children must be taught how to be vigilant when going to school on their own.

Parents must be informed about the dangers of letting their children go to school on their own.  Recently a child was chloroformed while waiting for her school bus by the roadside in Kumasi.

Parents should try to see their children off to board their buses instead of letting them go to board their school buses on their own.  This will eliminate the potential for kidnappers to take advantage of the vulnerability of such children.

The police can go a step further by engaging the services of a lot of plain clothes personnel who can mix up with the crowd at lorry stations, near schools and also through the use of cameras at vantage points, to enhance protection for the general populace.

Other methods of surveillance must be used to track people whose sources of income are questionable as compared with their lifestyle.  Security awareness programmes can be organised by the police for communities which will go a long way to forge a partnership to fight this menace.  Special communication channels using whistleblower concepts can be provided to enable anonymous tips to be offered to thwart kidnapping attempts or ritual murders.

Parents should on their own also provide awareness at home to their children to avoid talking to strangers, avoid walking along lonely stretches of roads alone and quickly raise an alarm if any of their friends are suddenly taken into vehicles and driven away etc.

Parents should make self-defence training like Judo available for their children so they can escape from kidnappers.  Mechanisms such as confirmation of their wards’ arrival in schools after leaving home can be put in place to ensure that the children are always safe.

Technology can also be used to track their movement so that should they observe the deviation of the children from their usual route, they can quickly alert the police for immediate intervention.

The writer is a social commentator