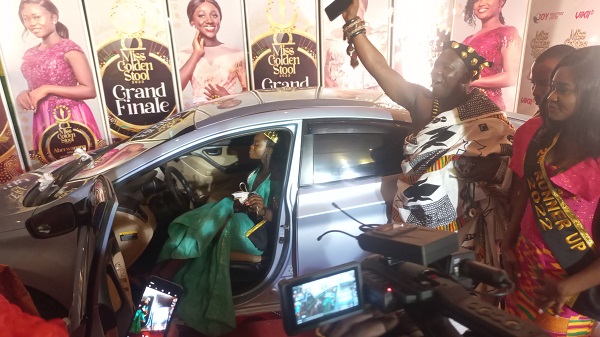 • Abrewanana finally takes a test drive in her car

Sooner than later, the Master of Ceremonies (MC), mentioned a third-year student of the Institute of Business Management and Jour­nalism (IBM&J), Abrewanana, from Mim who represented Ahafo, as the Miss Golden Stool 2022 winner.

For her prize, she took home a brand new Hyundai Elantra, GH₵7,000 and souvenirs from sponsors.

At the end, Obronii, who represented the people of Offinso Ayakaso in the Ashanti Region, oc­cupied the first runner-up position, taking home GH₵5,000.

Osiabou, from Juaben Ati in the Ashanti Region, ended up as the second runner-up, receiving GH₵4,000 as her prize.

Speaking to The Spectator, the Queen, Abrewanana, said this would afford her the opportunity to execute her project of touching the lives of single mothers.

According to her, the aim of her project is to empower single mothers to cater for their children to positively impact the society.

She expressed appreciation to all those who voted for her to win the contest, adding that she would continue to count on them.

The Chief Executive Officer (CEO) of Group Jay & Jay, the organiser, Sally Akua Amoakowaa, congratulated all the contestants for a good show, and told the final­ists that this should not be the end of the road for them.

“There are a lot of avenues the platform has given you, so make use of it rather than throw their hands in despair,” she added.

Akua Amoakowaa expressed appreciation to her team for their dedication and the sponsors for their immense contribution in making the event a success.

At the final show, the contes­tants exhibited their talents, cul­ture and intelligence through the various phases of the competition.

In all, there were 15 contes­tants who represented Eastern, Western, Bono, Ahafo, Ashanti and Central regions; seven were evicted, with eight making it to the finals.