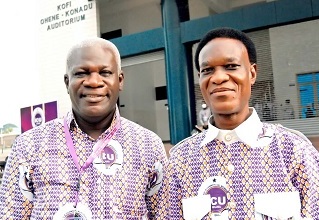 At the just ended 11th Quadrennial Delegates Congress of the Industrial and Commercial Workers Union (ICU)-Ghana, Bro Mogan Ayawine was elected the 9th General Secretary of the Union by popular acclamation with Bros. Emmanuel Baah Benimah and Samuel Anaga elected to the positions of Deputy General Secretaries responsible for Operations and Administration respectively.

The three-day event was held by virtual screening from August 25-27, 2021, at the University of Professional Studies-Accra, the first time in the union’s history, and saw satisfactory participation by delegates drawn from all over the union’s constituencies nationwide.

Bro. Samuel Ananga who is Deputy General Secretary-Administration was then the Tema Regional Officer of the ICU.

Labour and Industry observers see the new leadership as having a task ahead particularly in this COVID-19 pandemic period characterised by economic challenges on the local front and globally.

The latest change in leadership of the ICU saw a fulfillment of the demands of the Union’s Constitution, in that for the first time in its history, a sitting General Secretary, Bro. Solomon Kotei democratically handed over the mantle of leadership to his successor after two terms of eight years in office without squabbles.

In all this, other observers see the current leadership as principled and would build on the gains so far chalked by the previous leadership.

Brother Ayawine, in an interview noted that the current national leadership would strive to sustain the gains made over the years by the union and follow the “tried and tested pathway” of his predecessor.

General Secretaries, particularly Bro. Solomon Kotei the immediate past General Secretary whose knowledge and expertise he said he would “tap into” as and when the need arose.

He said in the current COVID-19 pandemic period, the Union would collaborate with its social partners (employers) more than ever before to attain increased contribute to the socio-economic development of the country.

Brother Ayawine emphasised that the union would not relent on its fight to ensure that the fundamental trade union rights of workers were respected and upheld in accordance with the laws of the land.

He noted that the Union would approach all negotiations in a very civil manner, without confrontation so as to ensure industrial peace and harmony at the workplace in particular, and in the country in general for sustainable growth and development.