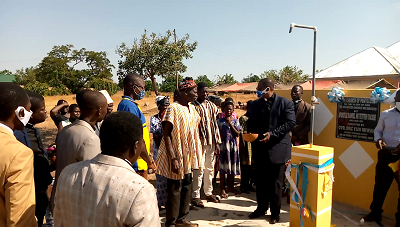 The Wa Area Church of Pentecost has commissioned two mechanised boreholes in Eremon and Babile Communities in the Lawra Municipality.

“They were drilled with support from the Pentecost Social Services, (PENTSOS), and the Suhum Area of the Church, to supply water to residents within the two beneficiary communities for drinking and other domestic chores.

Commissioning the projects, the Wa Area Head, Apostle Daniel Nii Tetteh Tackie expressed the church was delighted to provide amenities that would inure to the benefit of residents irrespective of their religious inclination and asked that residents maintained the facilities for longevity.

The Pentecost Church, he said, was ensuring that, the church was planted in every community across the country, with the construction and commissioning community-based church buildings (CBCB) .

In the Upper West Region, the church under the leadership of Apostle Tackie dedicated four CBCBs at Wapaani, Dapuoh, Danyauakura and Nator together with four other buildings at Kumbiehi, Bulenga, Lambussie and Buli in the Wa, Lawra, Wa East, Wa West, Nadowli-Kaleo, and Lambussie Political Districts respectively.

It dedicated two mission houses for its resident ministers at SabuliandLambussie in the Jirapa and Lambussie Political Districts, and laid the foundation stone for the construction of a CBCB at Gurumbelle and a mission house for the Bulenga Chapel in the Sissala West and Wa East Districts respectively.

The Area Head expressed delight in the collaboration the church enjoyed from traditional authorities in the region, with regard to land acquisition for its project and invoked God’s blessing upon them.

He used the opportunity to call on the chiefs and residents to assist the church to bring out the virtues in the society in order to project morality and mitigate social vices.

The chiefs in the respective areas where the projects were situated lauded the church for the boreholes and church auditoriums respectively.

They expressed confidence that with the presence of the church auditoriums in their communities, stakeholders would begin to scout their zones and include them in development efforts.

At Lambussie, the Assistant Director at the District Assembly, Mr Iddrisu Saphinu who was present at the commissioning of the church auditorium in the area praised the church for its vigilance inthe area and for alerting the assembly on key development issues.