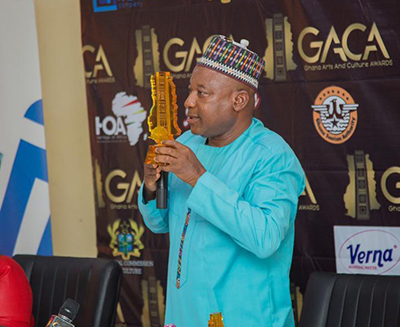 The event which sought  to honour forerunners and key players in the arts and culture circles is slated for November 14, 2020.

Speaking on behalf of the Minister of Tourism, Arts and Culture, Dr Ziblim Barri Iddi, the Deputy Minister, said to lose one’s culture is to lose cultural identity.

Ghana, he said had a competitive advantage when it comes to cultural tourism, considering the huge success of the year of return last year, where people came to learn from the heritage sites among others.

According to him, this would help explore greater opportunity in the area of culture and creative arts .

In the light of this, he urged Ghanaians to reject global imperialism, and promote what the country is endowed with, adding that by so doing Ghana would benefit immensely.

He noted that it was his hope that the programme would cause an attitudinal change in the lives of Ghanaians, urging all and sundry to be punctual.

Dr Ziblim said since the focus of the scheme is rewarding excellence,  he was optimistic that recognition would be given  to those who have held the torch over the years, adding that the public will have the opportunity to decide who has made the great impact.

“It is gratifying to note that those who will receive the awards will be presented with a plaque endorsed by the Ministry of Tourism, Arts and culture,” he said.

Following this, he declared the GACA 2020 duly launched.

The Executive Director of National Commission on Culture(NCC), Janet Edna Nyame said, “We need each other more than ever to rise above the storm, hence it is a delight for her to be part of such awards.”

She cautioned the youth against endorsing other foreign cultures for it could erode the gains made.

It is in this effect that the NCC sees the event as an honour, adding that it is in line with their aims and objective.

She called on the support of all and sundry to support such initiative to attract global investors.

Acting President of the Musicians Union of Ghana (MUSIGA) Bessa Simons on his part said in the midst of foreign influence, traditional musicians needed to be protected, through grant schemes to be able to stay through the industry.

“There are numerous models which can be adopted, the traditional musicians should represent the country at all tourist sites and pay them,” he said.

He said his outfit has developed a proposal which is a huge source of job Creation, and would be handed over to the relevant authorities.