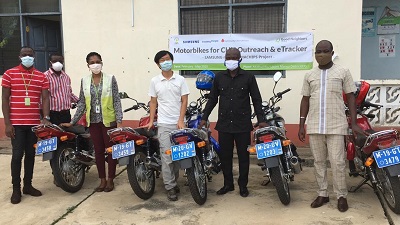 To support maternal and child health care services in the communities, Good Neighbours Ghana, a Non Governmental Organisation (NGO), has presented six motorbikes to the Adaklu District Health Directorate at a ceremony at the district capital, Adaklu-Tsrefe.

“This is also to strengthen the directorate’s supervisory duties,” said the Managing Director of Good Neighbours Mr Ilwon Seo.

So far, he said, Good Neighbours had presented 122 motivation tools, bicycles, torch light, boot and raincoats to the community health volunteers in the Adaklu and Upper Manya Krobo districts to support maternal and child health care programmes in those areas.

Mr Seo said that the bikes could also be utilised in the fight against the spread of COVID-19.

The District Director of Health, Mr Charles Azagba, expressed gratitude for the gesture and said that Public Health Management Committee and Rapid Response Team were working around the clock to fight the virus.