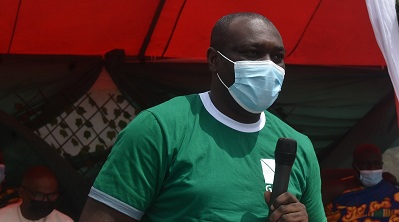 The Corporate Affairs Manager of the Ghana Rubber Estates Limited (GREL), Mr. Perry Acheampong has stated that the company was creating a very conducive atmosphere to maintain a strong relationship with their stakeholders. GREL produces latex or raw rubber for export.

He said this collaboration between GREL and all the communities would allow the company to assist in the improvement of livelihoods of residents in the operational communities.

Mr. Acheampong was speaking in an exclusive interview with this reporter on GREL’s Sustainability Policy of Respect for Human Rights, Responsible Development of their Operations and Best Management Practices in line with National and International Laws, Regulations and Conventions.

He said the company recognised the importance of the communities in its operational areas and so worked in a very responsible manner to obtain the Social Licence from these communities which GREL has invested over four miillion Euros in the last 10 years on Corporate Social Responsibility Projects in the areas of Health, Electricity, Water, Education, Sanitation among others aimed at improving the livelihood of these communities.

He said GREL was “Latex, and so much more” as their new slogan was evidenced in what they championed over the years in the operational areas.

Mr. Acheampong said GREL had empowered the people by offering very sustainable jobs and income to over 4,000 staff, through the implementation of national and international policies of biodiversity, the protection of water bodies and the ecosystem. T

He said the company gave life to the communities through the provision of quality, safe, potable and reliable water, the construction of schools, provision of desks, allowances to teachers, vacation classes to improve the educational standard of the areas.

He said in collaboration with the Association of Chiefs on whose Lands GREL Operates (ACLANGO) GREL had provided water systems for 14 communities serving over 20,000 people, built six health facilities which included 4 community health centres serving over 15,000 people and 16 communities have been provided with Community Centres for their social events.

On education, he said that 36 infrastructure have been provided which included 17 school buildings, libraries and teachers’ bungalows, annual vacation classes for over 4,500 Primary and Junior High Schools where the company paid for the tuition, learning materials and feeding for the students.

He disclosed that by the end of June 2021 the company had provided scholarships to 283 students in secondary and tertiary in the operational areas adding “GREL supports the traditional festival of Kundum of all the communities within its operational areas through ACLANGO”.