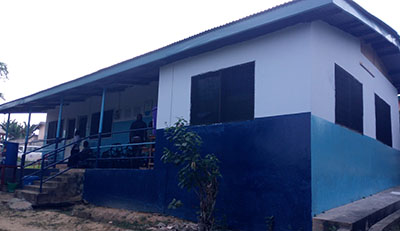 The Iduapriem Health Centre at Mile 8, in the Adieyie community of the Tarkwa-Nsuaem municipality in the Western Region, has appealed to the government and the Ghana Health Service, to assist in the provision of ambulance to improve emergencies, especially maternal cases.
The clinic established in 1992, as The Spectator learnt, serves farming and mining communities with a population of about 3,000 and continues to face health challenges each day.
The facility serves eight farming communities including Badukrom, Adieyie, Abompeniso and Akrika where cocoa and food crops including cassava and plantain are produced in abundance. The area hosts the Iduapriem Mine.
Presently, the Mile 8 clinic records three deliveries per week.
The Physician Assistant at the Health Centre, Ms Vivian Agyemang, made the appeal through The Spectator on Monday, when Evanex Foundation, a charity organisation, donated assorted items to the centre.
She said: “We need more of the equipment and assistance, especially an ambulance to handle emergencies including referrals. We handle referrals from the Mile 10 CHPS compound and we also refer patients to the Apinto Hospital at Tarkwa.
“But we don’t have an ambulance to handle critical labour situations and deliveries. Our only hope is the taxis, but they close after 10pm. Meanwhile, Mile 8 is a 24-hour health centre.”
Ms Agyemang reported that the Out-Patient-Department (OPD) recorded about 20 patients daily which meant that the four-room clinic was crowded and, therefore, inadequate for the growing Adieyie community and the surrounding villages.
The items were bags of cement, floor tiles, a refrigerator, a set of office furniture, a television set, two mowers and a polytank with a pumping machine attached.
She mentioned that the centre was faced with accommodation, water and transport challenges, and hoped that the new pumping machine would go a long way to save the situation, noting that the Evanex gesture had arrived at a time the facility needed critical equipment and infrastructural development to improve the conditions of patients.
The Chief Executive Officer of Evanex Foundation, Mr Evans Ghartey, said the donation was to honour a pledge to support the operations at the Mile 8 health centre, stressing “we are aimed at improving health delivery at Mile 8 and beyond”.
He explained that the foundation focused on giving back to the less privileged in communities “to make the world become a better place for them”.
“We have to start sharing the little that we have with others and bring joy to the people. It has been my dream to help the community in which I grew up. We are performing this task of giving back to the community.
“We want to promote good health and living conditions of the Mile 8 community and beyond. We will eventually lessen the burden of governments in providing for everybody,” Mr Ghartey added.
The Assembly Member of Teberebie Electoral Area, Mr Manasseh Addison-Sackey, noted that Mr Ghartey, who had lived in the nearby New Techiman community, was well versed in the challenges facing the Adieyie communities, and described the donation as “a welcome gesture”.
He stated: “This is, indeed, a new development for our communities. It shows the commitment he made earlier and the love Evanex Foundation has for the people.”
The Queen of Adieyie, Nana Yaa Saara, reiterated that the call for an ambulance was one critical factor for health delivery and emergencies, especially for women in labour, adding “we can’t afford to lose our pregnant women through preventable situations”.