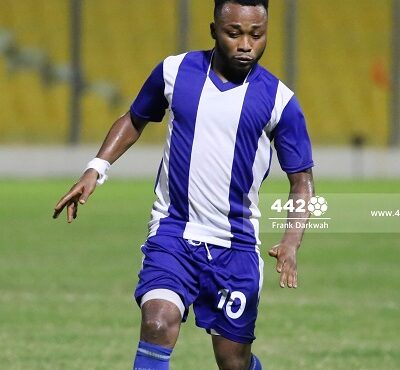 When he took the bold decision to return home from the United States to relaunch his career, many wondered whether it was a prudent move to make.

Endowed with a dazzling feet that draws tantalising patterns on the lush field, one would have thought the swash-buckling midfielder will rather continue to avail his talent to other clubs in Europe, Asia or the

But for the 30-year-old Gladson Awako, there was the need to come home and ‘reboot’ a glittering football career that was steadily taking a slump.

“Sometimes, you miss domestic football and when things are not going as envisaged, there’s the need to come home, put things right and stage another adventure,” he says.

On hearing he had touched down, many clubs dashed fiercely for his signature, all wanting to have a good feel of Awako’s phenomenal midfield inventiveness where he sprays the field with a series of mesmerising runs, adroit dribbling and incisively intelligent passes.

Rather interestingly, Awako decided to seal the deal with Ghana’s Wonder Club – Great Olympics – an outfit whose stay in the domestic elite league has been wondrously inconsistent.

Indeed, since joining the Dade boys in the 2019/2020 season, the Voltarian has been shimmering and had inspired the Blue-and-White shirts to some incredibly difficult wins – most often scoring or serving as provider, before the season was truncated due to COVID-19 concerns.

But the player would sparkle again from where he left off as he has been in tremendous-fine-fettle form in the new season, picking up the Ghana Premier League (GPL) Player for December.

Indeed, his sterling form in the six matches under review (November-December) saw him bang home four goals with three assists. Within the period, he also clinched the NASCO Man-of-the-Match award four times.

Limpidly, Awako had shown more than enough that he is ready to don the colours of the senior national team again, having been called up into the Black Stars for a friendly against the Argentina national team in October 2009.

Ever since, the Olympics playmaker and skipper has been looking forward to lace up his boots again for the Stars, having now mushroomed into a player of the first water.

Years back, he had been criticised for overly hanging on the ball. Now, Awako is a huge departure from that style and distributes the ball with the aplomb of a veteran.

It is the belief of this column that the sweat merchant of the Black Stars, Charles Kwablah Akonnor, is watching Awako closely and should be willing to give him an opportunity to showcase that dexterity bottled up in his moderately-sized body.

For the records, the talented Awako was a member of the national Under-20 football team (Black Satellites) that dazzled the world to win the 2009 FIFA Youth World Cup held in Egypt. Ahead of that feat, he had played a crucial role to help Ghana annex the African Youth Championship in Rwanda, same year.

Awako was also a CAF Champions League winner with TP Mazembe in 2015, having won the domestic trophy with the DR Congo side three times – beginning from 2012. He was also part of the squad that clinched the CAF Confederation Cup and the CAF Super Cup – all in 2016. In 2013, Mazembe were runner-up in the Confederation Cup in which he played a significant role.

The ‘Nungua boy’ started his career at Ajax Academy, joined Heart of Lions, which later loaned him to Real Sportive (and back to Lions) before his move to Berekum Chelsea – and was a member of the Berekum side that reached the group stage of the CAF Champions League in 2012.

The high-flying Awako tasted the thrills of US football with Phoenix Rising FC in the 2017-2018 season, finishing as runner-up in the USA Soccer League (USL) Championship, before heading home.

With the experience under his sleeve, Coach Akonnor cannot afford to overlook this talent in the next Stars’ call-up. In any case, the Stars’ chief trainer had earlier asserted that local players who ‘shine’ would get a look-in, and the nimble-footed Awako must get the nod!