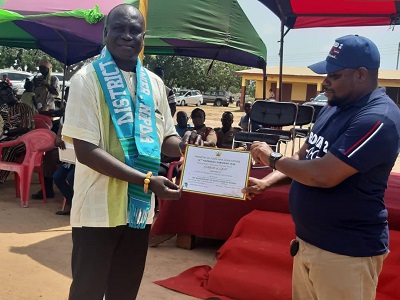 Mr Armah in an address advised the youth to go into farming because “there is dignity in it and it is profitable.”

Seven other farmers were also honoured at the ceremony.

The overall best farmer received a double door refrigerator, bicycle, a 32-inch television set among others.

Speaking on the theme “Enhancing Agribusiness Development under COVID-19 Challenges and Opportunities” the Ningo-Prampram District Chief Executive, Mr Jonathan Teye Doku noted that the Planting for Food and Jobs had been a major intervention crop production programme for the district.

The Ningo-Prampram District Acting Director of Agriculture, Mr Prince Ofori-Boateng, noted that agriculture transformation remained the underpinning factor for Ghana’s economic development and must be given the needed attention to build a solid economy.

He was hopeful that the processes being implemented by government to transform agriculture into business would create more jobs, raise farmers’ incomes and further reduce malnutrition.