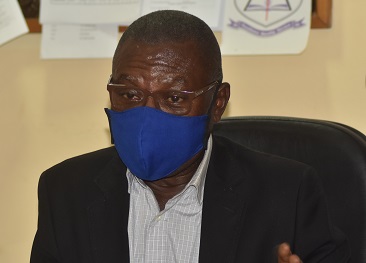 Low turnout greeted the first day of re-opening for final year students of tertiary institutions which were compelled to shut down in the wake of the coronavirus (COVID-19) pandemic in the country.

Ghanaian Times reporters visited various campuses and observed that the University authorities have taken delivery of Personal Protective Equipment (PPE), including face or nose masks, liquid soaps, tissue papers and thermometer guns from the National Council of Tertiary Education (NCTE), which are to be used by lecturers and teachers to protect themselves.

Although some have maintained their virtual class work model through on-line learning and teaching during the three months absence of physical presence on campus, others have taken advantage of easing of the restrictions to recall students to campus to complete the academic calendar.

At the University of Ghana, Legon campus, some students were seen arriving at their various halls of residence to resume academic work.

As directed, hygiene protocols to help stop the spread of the virus had been put in place at the various lecture and residential halls.

Professor Asabere Ameyaw, President of the Methodist University College, said enough measures to promote social distancing and personal hygiene had been instituted to check the spread of the disease campus.

He said students had been asked to bring their own food from home due to the closure of the canteen and were dissperse as soon as lectures or examinations were over adding that a COVID-19 response team was on stand-by to respond to any unforeseen circumstances that may come up.

At the Ghana Telecom University College, Vice President, Professor Isaac Abeku Blankson said as ICT oriented institution, they took advantage of the on-line platform to complete the academic calendar well ahead of time.

At the Central University College at Mataheko, the reporter was informed by the security personnel present that the students have completed their examinations,thus,there was no need for them to return to campus.

AMA TEKYIWAA AMPADU AGYEMAN, REPORTS that at the Koforidua Technical University(KTU), lectures started at about 7:00 AM with both lecturers and students wearing their nose masks.

Security personnel at entrance had the thermometer guns and were checking temperatures of all who entered the campus.

Veronica buckets were also placed at the entrance and vantage points of the university to promote proper and regular hand washing.

Registrar of KTU, Dr Nii Annang Mensah-Livingston explained that the university was expecting about 3, 600 final year students to return to complete the semester and write their examinations.

He said lecture halls had also been rearranged and their sizes reduced in line with the President’s directive, adding “number of students in our GETFund Hostels has also been reduced and our COVID-19 Response team had also interacted with private hostel owners to also observe the safety protocols.”

In case of emergencies, he noted that an isolation room had been made available while awaiting the Eastern Regional COVID-19 response team to pick them up for further health checks.

At the All Nations University, the Registrar, Reverend Adraina Ion said final year students would not be returning physically as they would be completing their courses online, adding that, safety protocol measures had been put in place at the University.

DAVID O. YARBOI-TETTEH REPORTS from the Winneba campus of the University of Education, Winneba (UEW) that few students had reported to campus as of 11:00 AM yesterday.

Their temperatures were taken as some officials handed over to the students their face masks.

The Public Relations Officer of UEW, Ernest Azutiga, said the institution had received 38,000 facemasks and other essentials to be distributed to the students and lecturers in all the four campuses of UEW including Winneba, Ajumako, Kumasi and Ashanti Mampong.

He indicated that, management of UEW had also installed 137 automatic hand sanitisers at the various academic facilities and halls of residence on campus.

At the University of Cape Coast (UCC), arriving students underwent protocols including hand washing, use of sanitisers, temperatures taken and student’s identity checked before being allowed to enter the hall.

At the Cape Coast Technical University (CCTU), the atmosphere was calm with few of the students going through the registration process.

Some of the students who were staying outside campus, had also moved to take up residence on campus in order to protect themselves from contracting the virus.

The authorities, he said, had put in place measures to support the fight against the COVID-19 pandemic.

From Takoradi, Clement Adzei Boye, reports that the University of Mines and Technology (UMaT) and Takoradi Technical University (TTU) had reopened to students for academic work to begin.

The Registrar of UMaT, Mr Matthew  Kwabena Okrah indicated that, to safeguard the health and safety of the University community, the Security Unit would enforce the No Mask, No Entry directive.

He announced that students would report to the UMaT Clinic upon arrival, for screening from June 15 to 17.

Additionally, the Security Unit would further ensure that there would be no mass gatherings including church services or meetings, association meetings, or any form of gathering of students apart from lectures on campus.

The management assured students and parents that it was working to ensure the safety of all members of the university community.

For his part, the Public Relations Officer (PRO) for TTU, Kow Richardson, explained that final years   would spend four weeks for lectures in addition  to the virtual lectures which took place during the close- down of school.

This, he said, would be followed by a two-week examination.

All students and lecturers, he noted, would be provided with the needed PPEs including hand sanitisers and nose masks with ‘no mask, not entry’ notices posted at all vantages points.

KINGSLEY E.HOPE in KUMASI reports from the Kumasi Campus of UEW that, there was low turnout at the time of visit by the Ghanaian Times as at 11:30 am.

The few students that had reported were given personal protection equipment by management of the institution as it was observed that Veronica buckets were strategically being fitted.

Some of the few students who were spotted on campus during the Ghanaian Times’ visit could not hide their joy for the reopening of lectures as they claimed staying home for long made them rusty.

Similarly at the Kwame Nkrumah University of Science and Technology (KNUST), there was very low turnout at the campus on the first day of re-opening school although management had instituted safety protocols as directed.

At Christian Service University College, a private university, at Kwadaso in Kumasi, the institution was already two weeks into their take home virtual examination with one week to complete.

It was gathered that, the final year students were already done with their examination and working on their thesis as management of the institution was already preparing for the 2020/2021 academic year.