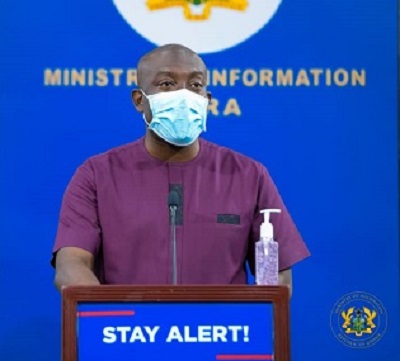 The New Patriotic Party (NPP) government has debunked claims by the opposition National Democratic Congress (NDC)  that it  had  failed to fulfill  most of its manifesto promises leading up to the 2016  election.

It said the Akufo-Addo-led government made 388 promises in its 2016 manifesto and not 631 as claimed by the NDC at its press conference earlier yesterday.

In a press  conference  held yesterday  in  Accra, the  Minister of Information, Kojo Oppong Nkrumah  said  the  claims by the NDC was false and that  the opposition  party had lifted words from the vision and strategy framework of the NPP manifesto and copied the words and phrases as articulated in them  and created them as new promises in order to  increase the promises.

He said “this is attempt to distort the base and claim that we have made a declaration that is dishonest. This attempt itself is the true definition of intellectual dishonesty.”

According to the Minister of Information, the NDC had added on to the 235 new promises to its initial promises of 388 thereby increasing it to 631.

Mr Nkrumah said the NDC had made two claims saying that the first one is the claim that whilst government in its report in February this year, outlined 388 promises and accounted for them, they (NDC) have discovered an extra 235 promises which the government has hidden or refused to account for.

The NDC had in an earlier press conference accused the government of “mind-boggling” intellectual dishonesty because it was not being candid with citizens in terms of delivering on its 2016 manifesto.

A presentation on the promises of the NPP which was led by Samual Okudzeto Ablakwa, the North Tongu MP, said the fulfilment of the NPP’s promises was woeful.

“You are given four good years of the destiny of the people and all you can do is 14 per cent. And even this we have been so generous. You scored an F.”

“You don’t even have the courage to apologise for it and try to see if you can make amends but you think you can lie your way through by understating the number of promises that you made,” he argued.