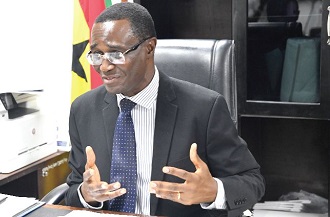 The new Integrated Customs Management System (ICUMS) which became fully operational at Ghana’s ports this month has generated GH¢490 million between June 1 and 17, 2020

Acting Commissioner-General of Ghana Revenue Authority (GRA), Ammishaddai Owusu-Amoah, who disclosed this yesterday in Accra, said, that based on average collections from January to May this year, the new system was on course to surpass or match the monthly average revenue of GH¢920 million collected by the GCnet system from January to May this year.

He noted that the collected revenue contradict opinion that the Authority was in line to make losses by deploying the ICUMS.

“So far, notwithstanding the earlier implementation challenges, the system generated GH¢490 million from June 1 to 17, 2020. Looking at this trend, it is obvious that the GRA will not be losing revenue as being highlighted by some sections of society,” he stated.

The system, Mr Owusu-Amoah said, has so far processed 53,000 Customs Bill of Entry (BOEs) nationwide with 16,000 of these submitted at Tema while 12,000 relates to pre-manifest processes.

Out of the total Tema BOEs, about 11,000 have been successfully processed while about 5,000 of the BOEs were at various stages of processing at Customs Technical Services Bureau (CTBS), he indicated.

The 4,000 BOEs, which have been delayed, according to the Acting Commissioner-General, was due to unanswered queries by declarants for the necessary supporting documents, mostly requirements by Ministries, Departments and Agencies such as permits and fees, manifest mismatch and to effect corrections.

Earlier, the system, he said, was confronted with Tax Identification Number (TIN) not populating at the front-end of declarant, which has been resolved, and co-loading and manifest matching which has been addressed with alternative arrangements for all importers who still have challenges with it.

Additionally, the GRA has intensified training of staff and importers in collaboration with the Freight Forwarders Associations to build their capacity and make it user friendly, Mr Owusu-Amoah stated.

He added that “We have established a call centre and support service desks both at the Tema Long Room and at the CTSB to deal with complaints of declarations for speedy resolution. In addition, a toll free number has been established to address the concerns of the trading public.”

He further assured importers that the GRA was engaging the Ministry of Trade and Industry and all other stakeholders to tackle concerns about demurrage in the system adding that “the Customs Division is up to deal with any challenge which will arise from implementation of ICUMS.”

Assistant Commissioner of Customs, Emmanuel Ohene, Sector Commander of Accra and Head of the Technical Implementation Committee of ICUMS, noted that the GRA has projected that it would commence 48-hour end-to-end clearance processes at the port effectively in the next six months to achieve the system’s set goals.

Unlike ICUMS, he explained that previous systems were not able to conduct end-to-end clearance for the three segments which include pre-arrival, clearance and post-clearance.