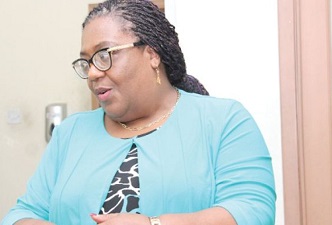 According to citinewsroom.com, her status was confirmed by sources within the authority.

The NHIA is yet to give further details on the development.

She is the latest government appointee to have tested positive for the virus.

Ghana’s Ambassador to the United Kingdom, Papa Owusu Ankomah, according to report has recovered while Metropolitan Chief Executive of the Sekondi-Takoradi Metropolitan Assembly (STMA), Anthony K.K. Sam, succumbed to the disease on June 12.

Minister of Health, Kwaku Agyeman-Manu, whose status was confirmed by President Nana Akufo-Addo last Sunday during a televised broadcast, was currently home and isolating after receiving treatment at the University of Ghana Medical Centre (UGMC).

Of the number, while 4,328 recoveries have been recorded, 58 infected persons have died so far.

Director-General of the Ghana Health Service, Dr Patrick Kuma-Aboagye, indicated that, three out of four of the new deaths were recorded within the Greater Accra Region.

He stated that the Ashanti Region confirmed the most number of new cases at 70 while the Central and Savanna regions recorded 42 and 34 cases respectively.