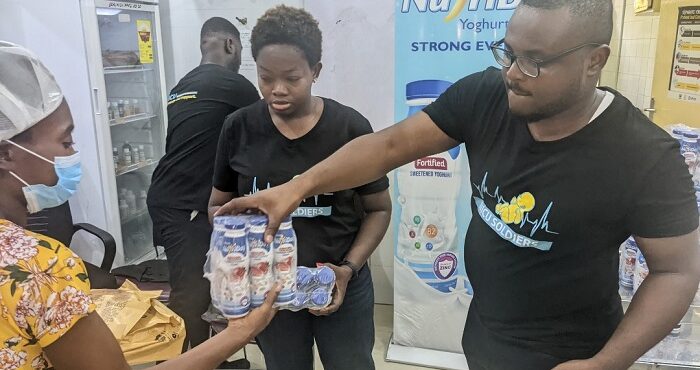 Sunday, May 8, was Mother’s Day, a day to celebrate mothers across the world for their immeasurable contributions to their children, families and society.

However, in many hospitals were mothers who could not be part of any celebration due to the health conditions of their babies.

To help lessen the stress on such mothers, NICU Soldiers, an advocacy blog that focuses on the Neonatal Intensive Care Unit (NICU), visited mothers and health workers at the NICU of the Eastern Regional Hospital at Kofridua.

Supported by Nutriday, a zinc fortified yoghurt by FanMilk, the organisation shared lunch, snacks and packs of Nutriday yoghurt to health workers, mothers whose babies were on admission at the unit and presented a special gift to a mother who had been at the facility for the longest period.

According to Ms Efia Akese, founder of NICU Soldiers, she understood the plight of the women as she has experienced the NICU on two occasions.

“This unit brings back memories of sleepless nights but I am happy we can contribute to alleviating the trauma mothers here go through.

“Last year, we raised funds for parents at the Korle Bu Teaching Hospital in Accra who could not afford the oxygen bills of their babies. This year, we hope to raise funds to purchase some equipment to support this unit.

“Our major fundraiser will be launched in July and this donation is a prelude to the equipment donation,” she said.

Ms Akese called on individuals and corporate organisations to support the cause of the organisation saying, “most neonatal deaths and life-long complications can be prevented if NICUs are well resourced.

“We hope to raise money to buy equipment such as phototherapy machines, neonatal pulse oximeters and radiant warmers for the unit,” she said.

She expressed gratitude to the health workers at the unit for their selflessness and commitment in ensuring that the babies were well catered for, and Nutriday for the support.

A Specialist Paediatrician at the unit, Dr Francis Mensa Akwetey expressed thanks to NICU Soldiers for the gesture.

“We really appreciate what you have done for our mothers here. Today is Mother’s Day and we are celebrating mothers all over the world but these mothers are here taking care of their sick babies.

“It is nice for you to think about these mothers who could not be at their churches or homes to be celebrated,” he said.