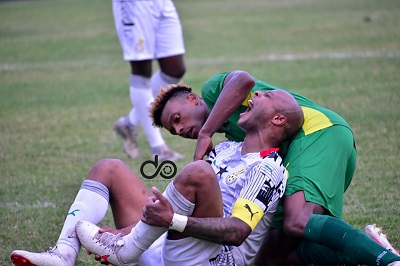 Sweat merchant of the Black Stars, CK Akonnor, deserves a bouquet of orchids for seeing Ghana to the Cameroon 2021 African Cup of Nations.

First, the Stars on Thursday held their own against South Africa away as they battled Bafana Bafana to a grueling 1-1 tie – a result that guaranteed Ghana a place in next year’s AFCON – with a game to spare.

And, this feat was achieved without some of the marquee names like skipper Andre Dede Ayew and brother Jordan as well as Thomas Partey, to mention but a few.

So, having already booked their ticket, many expected Akonnor to use many of the fringe players – who are mostly home-based, in their second game against Sao Tome and Principe played at the Accra Sports Stadium on Sunday.

Interestingly, we saw the Ayew brothers and Partey playing for the entire duration in the comfortable 3-1 home win.

Many Ghanaians would have loved to see Great Olympics’ star player and the league’s finest performer, Gladson Awako, go the whole hog, instead of the 45 minutes time he was allotted after the break.

One wonders what Akonnor wanted from Andre by keeping him in the game for 90 minutes. That was absolutely unnecessary!

In his last-ditch attempt to get his name emblazoned on the scoring sheet, the Ghana captain nearly sustained a nasty injury as a Sao Tome defender lunged his foot on the path of Andre who for several minutes, had to receive medical attention on the pitch.

All would have put the blame squarely at the feet of the coach if something bad happens to Andre, an important player he would need in the nation’s Qatar 2022 World Cup qualifiers in June.

Having already booked a place for Cameroon, it was a big moment for the coach to have given the locals the opportunity to prove their mettle!

Do not forget, these boys have been in camp preparing feverishly for South Africa as well as Sunday’s tie for about a month or so.

So, what is the essence for keeping them if you cannot give majority of these huge local talents the chance to demonstrate the stuff they are made of!

When you consider the fact that South Africa failed to qualify for the biennial football showpiece after their 2-0 loss to Sudan on enemy territory, you would understand why the Stars and their technical staff deserve some pat on their back for making it.

Importantly, we must start drawing the ‘master plan’ for the Cameroon tournament now if we really want to break the 39-year-old trophy drought.

HOOLIGANISM at our stadia is increasingly taking a very terrifying dimension and only last Sunday, yet another nasty incident was recorded at a division one league game.

Indeed, what was supposed to be an enthralling afternoon of football turned bloodily ugly when supporters of the home side, Wamanafo Mighty Royals, turned their frustrations on match officials, hammering them to a pulp, for perceived biased officiating.

This was after their game against Sunyani-based Bofoakwa Tano had ended in a scoreless stalemate.

It was a pathetic sight as many media outlets reported that the officials were beaten in a manner that suggested they were notorious armed robbers.

Predictably, the Ghana FA was expected to ban the venue, as it had done in similar situations; and they did just that. But it is not enough!

Perhaps, the FA must be told in plain language that their best in the fight against these hooligans is not enough to halt these needless incidents. It is not enough at all if we only end up preventing the offending clubs from using their home facility after they had inflicted carnage on human beings.

We must go beyond banning venues after such sordid acts – and like ‘blood-thirsty’ wolves after their prey, hunt for these iniquitous band of hooligans.

We have failed to deal ruthlessly with pitch hooliganism over the years and it would continue to bite us hard until we see these merciless miscreants arrested, prosecuted and gaoled to serve as deterrent to others.

Fortuitously, the FA has their cameramen recording these games and they must be able to produce video evidence from which such barbaric fans can be smoked out.

We have toyed with this issue for far too long and that is why such perpetrators get emboldened over the years and continue to break more bones season-in-season-out.

It is lamentably becoming a regular feature in our domestic leagues and it does not encourage potential sponsors to want to invest in the game. We better halt it now or just throw our hands up in despair.