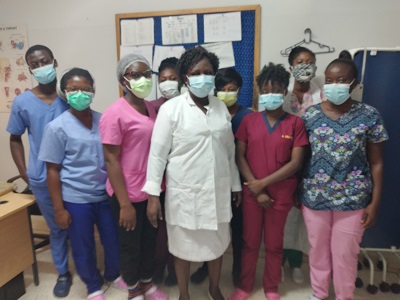 Ms Charlotte Agyakwa, the  Deputy Director of Nursing Services, (DDNS) at the  Ear, Nose, and Throat (E.N.T),  Unit  at the  Shai Osu Doku Hospital, Dodowa, in the Greater Accra Region,  has warned that  it was dangerous  to use  twirling cotton-tipped swabs  to remove earwax.

She has advised that people should not introduce any foreign material into the ears  whenever they itched, or  felt  discomfort.

Speaking in an interview with The Spectator recently  at Dodowa, she said the wax in the ear had a natural mechanism which got rid of itself at the appropriate time, hence there was no need to use  any foreign material  to remove it.

The DDNS  explained that earwax was a natural moisturiser which prevented the skin inside the ear from becoming  too dry, prevented dust, bacteria and other infectious organisms from reaching the eardrum.

Ms Agyakwa, however, explained  that there were some people who produced  more earwax than others, a situation which caused  the ear to block early, and  required   that the patient  should be examined at the hospital and the necessary assistance provided.

She explained that those who had the penchant to remove the wax from the ear, rather made it dry to compound  their problem as  they  pushed the wax further into the ear.

The DDNS, further said  those who used  twirling cotton-tipped swabs  to remove wax in the ear, could accidentally damage the eardrum and further worsened their  problem.

She has, therefore, advised people to report at the hospital whenever they were confronted with any problem with the ear.