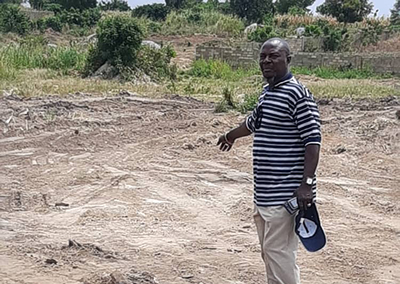 The head of Okoryootse Ashitey family, Nii Ashitey Tetteh has cautioned individuals, estate developers and illegal sand winners to stop encroaching on their farmland at Bosuafise in the Ga South Municipality.

Nii Ashitey Tetteh , last week, took sections of the media round to see the level of destruction and encroachment on the farm land.

He said the government should also crack the whip on such offenders.
The over 24 acre land, he said, was gifted to their family in 1850 by the Nii Odametey I family and was covered in a document titled “Deed of Gift”.

Nii Ashitey Tetteh also produced a High Court judgement by Justice Kwabena Asuman-Adu Jr. in 2016, granting his family title, and possession to the land against trespassers and awarded a GH¢10,000.00 cost against them.

He disclosed that, his forefathers had been farming on the Bosuafise land since 1850, alongside with 17 other families, who also owns lands there.
He said Bosuafise, was until recently, one of the food producing communities in the Ga rural setting, who produced foodstuffs to feed people in Accra and the Metropolis.

Mal-Bernice Estate; Anyaa-Gbawe Zongo community members and other individuals, were those identified to have encroached on the farmland.
Mr Evans Abaka, who works with Mal-Bernice estate, said the land was given to them by Jonas Quaye Lamptey, Osman Kweitia and Ibrahim Kweitia, all from Manhean, in the Ga West municipality.

Mr Evans Abaka said his company is willing to engage in peaceful negotiations to forestall any trouble and violence.