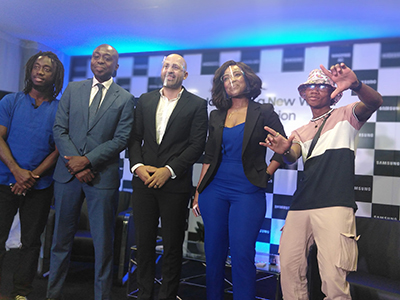 Brand influencers of Samsung, KiDi, Joselyn Dumas and Bright Tetteh Ackwer have lauded Samsung for their creativity and innovation at the unveiling of their new line of products.

Samsung, in collaboration with Electroland Ghana Limited (EGL), on Tuesday unveiled brand new Crystal UHD TV, 8K QLED, Frame TV and a wind-free air-condition at the Office of EGL on the Spintex Road in Accra.

Delivering the key note address, Managing Director of Samsung Ghana, Mr Eugene Nahm, said, it was to make things comfortable for their customers and welcomed them to a new world of innovation.

He said Samsung always considered making the lives of its consumers better with cutting edge technology, adding that it was the force that made them the number one technological hub in the world.

The Managing Director of Electroland Ghana, Nour Seklaoui,
touching on the frame TV, said it became an art when off, where the television could be used as a photo frame or a drawing board.

He added that it was an innovation which was putting consumers on a new level of experience, and added that all the products were available at Electroland stores across the country.

Speaking at the unveiling, KiDi who tried his hands on a TV Video Game, said the picture and sound quality was unmatched, adding that the equalisers of the sound system unveiled were top notch.

Actress, Joselyn Dumas on her part said she was blown away by the technology and innovation exhibited by Samsung, and the quality with which the new line of product portray.

She said the innovation exhibited was what millennials wanted, adding that it was a step in the right direction.

Satirical artist, Bright Tetteh Ackwer who demonstrated his drawing skills on the frame TV, said he was excited due to how he connected his phone to the TV effortlessly.

He noted that for an artist, the Frame TV will serve two purposes for him; thus for work, and to have fun after work.

In 2019, the Samsung QLED TV range received universal praise for its innovative display quality, sound, design and numerous pioneering features, and this year Samsung had added a twist to the story.