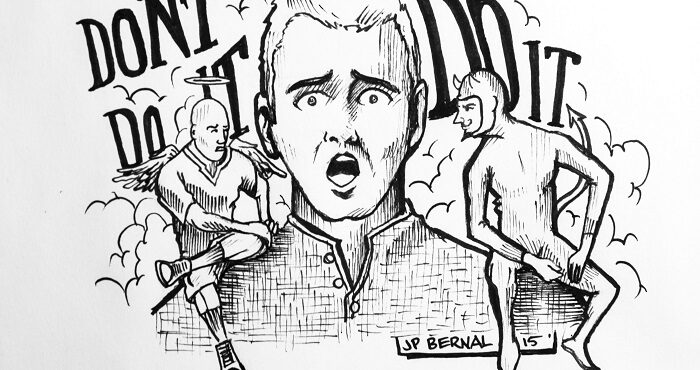 A great deal of the unhappiness and much of the vice in the world come from a lack of moral courage and purpose. The weak and undisciplined person is at the mercy of every temptation. A researcher studying self-fulfillment reported that “nothing has subverted self-fulfillment more thoroughly than self-indulgence.”

In order to have moral courage and do the things that are best for us, we must believe we are capable, we must have faith in ourselves, as well as in our values. If we excuse ourselves because “we can’t,” we never will…for “without faith we can do nothing” as the scripture says.

Popular clichés often miss the point of moral courage. For example, consider the description of a person groping for life as someone who “has not found himself.” The statement is not accurate because self is created, not found. We change our circumstances by changing our attitudes and exercising our moral courage.

Or consider those who give up on life and dismiss it as “hopeless.” They have become discouraged and have lost all hope. Of course, the Lord could intervene and help at any time, but He knows it is through the exercise of faith and courage that we grow and become stronger. We learn the virtue of self-discipline that helps forge strong character traits. And the cycle keeps repeating itself.

By blending courage with faith, we create character. Character, in turn, brings the moral courage and faith to stand firm or yield when desirable. And so the circle is complete, ready to begin again.

The actual building of moral courage is an individual, personal endeavour which goes on inside of us each day. It is an achievement, not a gift. It develops gradually through continuous right decisions, and it must be pursued systematically through the end of our days.

Moral courage brings self-discipline, self-respect and self-control. It brings victory over oneself, and that is the ultimate challenge facing each of us in the personal search for truth.

So it is not true what many have said: that truth needs no defence, that   truth will overcome the false, with power of its own, with none to speak its name or plead its cause. Perhaps when eternity has balanced all that is on time’s unerring scales, and future, present, past are one, then truth will stand alone, without the aid of just and fearless men.

But, for now, as long as man’s ambition divides the false and true, every particle of truth requires its advocate. It is as Mencken wrote: “The smallest atom of truth represents some man’s bitter toil and agony; for every ponderable chunk of it there is a brave truth-seeker’s grave upon some lonely ash heap…”

Recorded history is evidence enough that falsehood often reaps rewards of fame and praise, while truth inherits the scaffold or the rack: For Socrates the hemlock, for Christ bleak Calvary.

Even now, in these enlightened times and this liberated land, the voice of truth is often either unheard or unheeded. For the sound of truth is soft, almost a whisper.  It can be drowned out by the roar of greed or political ambition. It can be squelched by the clang of diplomacy. Its delicate nature is chained by the strong fetters of ignorance and superstition. It is bought and sold by racial prejudice and whispered away with gossip. But, by and large, truth dies the pauper’s death, succumbs to poverty, friendless, without nourishment or aid.

It is not enough to believe in truth, for in truth, “Faith without works is dead.” So, too, a belief without action is a lifeless creed. It is not faith alone which drives Akosombo’s turbines, but faith’s application in harnessing the latent power of the massive Volta Lake.

There is more at stake here than parables and rhetoric. Truth is every country’s most valuable national treasure. And that nation which suppresses it in the name of social convenience, conceals it for the sake of political expediency or camouflages it behind false diplomacy not only deserves to fall, but surely will.

We are all accountable. Every voice adds that much more weight to the side of fact.  We must be sincere, objective in our pursuit of truth and unequivocal and dauntless in its defence. Much depends on it.