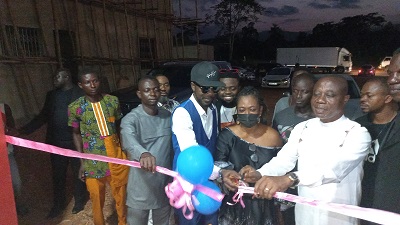 Member of Parliament for Fanteakwa South, in the Eastern Region, Mr.Kofi Okyere Agyekum, has commended musician, TiC for investing in a strategic project by opening Gennex Pizza Restaurant and Grill at Nsutam.

According to him this investment had a lot of future for job creation and development of the area.

The facility along the Accra-Kumasi highway is made up of a Rest Stop, Restaurant and Grill, Conference Room, Children Playground and an Event Centre.

This adds to the existing branches at Dansoman, White Cross, Weija, Kumasi and Konongo.

Speaking at the ceremony which took place on Sunday, March 6, 2022 at Nsutam near Bunso, Mr. Okyere-Agyekum expressed his appreciation to the music legend for embarking on such initiative.

“TiC has a vision, he has seen that this area which already has Paradise, Lindador and others on the stretch would become the hub and he has done the needful,” he said this in praise of the musician.

The MP thanked TiC for such a project for and said that would create employment avenue for the youth.

Assorted dishes in the place would also provide alternative to the people of Fanteakwa and travellers who ply that route.

The Distric Chief Executive of Fanteakwa South, Mr.Ernest Ofosu, said the initiative by TiC would break the monopoly in the area and lead to good customer service for the people.

He expressed appreciation to the musician saying it would open up business opportunities and to the growth of the area and called on other investors in to take a cue from what TiC had done to invest in the district.

Elated TiC also expressed appreciation to people of Fanteakwa South for the outpouring of love, adding that customer service was key in the affairs of Gennex Pizza Restaurant and Grill.

He said he would continue to contribute his quota to job creation and development of the area in particular and the country as a whole.

The second part of the ceremony saw a breathtaking performance from the music legend TiC, Nero X among others.