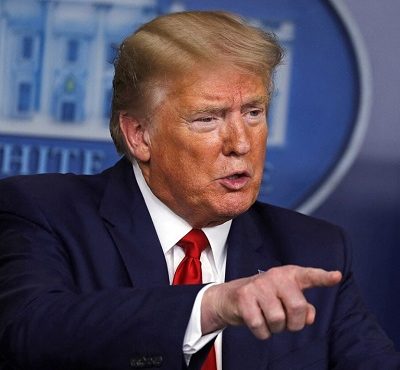 US President Donald Trump says he will not watch the US Soccer national teams or the NFL if players are allowed to kneel during the national anthem.

The United States Soccer Federation repealed its requirement that players stand during the national anthem on Wednesday, saying the policy was wrong and detracted from the Black Lives Matter movement.

Last weekend, NFL commissioner Roger Goodell said the league made mistakes in not listening to players in a video on Friday, denouncing racism in the United States amid widespread protests over police brutality against black people.

On Saturday, President Trump quote-tweeted Gaetz twice, first posting: “I won’t be watching much anymore!” Then added: “And it looks like the NFL is heading in that direction also, but not with me watching!”

Houston Texans star JJ Watt was one of a number of athletes to criticise the stance taken by Gaetz and Trump, saying: “If you still think it’s about disrespecting the flag or our military, you clearly haven’t been listening.”

Major League Soccer is set to return on July 8 at Walt Disney World following delays due to COVID-19, while the new NFL season is set to begin on September 10.

US Soccer’s ban on kneeling during the anthem came into effect after USWNT player Megan Rapinoe kneeled in 2017 in support of former NFL quarterback Colin Kaepernick.

The former San Francisco 49ers quarterback Kaepernick first kneeled during the anthem in 2016 in protest against police brutality and racial inequality. – Eurosport