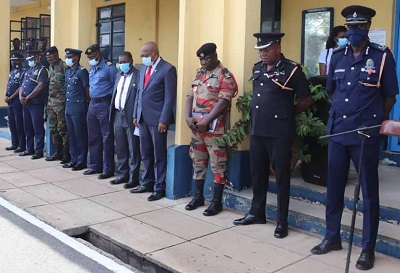 The Western Regional Police Command on Monday, held a memorial parade at the Police Headquarters at Sekondi in honour of four personnel, who died in line of duty.

The day was also set aside to remember fallen heroes in the region.

Addressing the parade, the Western Regional Police Commander, Deputy Commissioner of Police (DCOP) Mr Felix Fosu-Agyeman said the death of the heroes was a great loss to the Police Administration, the Western Region, their families and the entire nation.

He added: “Today we have all witnessed the wreath laying ceremony and parade organised in honour of our departed colleagues.  We solemnly reflect on this day.  Personnel in the Western Region will continue to work very hard to provide maximum security for the good people of the region. We pray that the good Lord Almighty will continue to strengthen the bereaved families at all times.”

DCOP Fosu-Agyeman announced that a church service would be organised on Friday at the forecourt of the Regional Headquarters Sekondi to say prayers for the fallen heroes, their families and the police in the region.

He assured that the police would do everything possible to ensure peaceful elections in the region in December 7 and reminded all persons to stay away from violent situations, before, during and after the period.

“We wish to entreat the public to continue to be vigilant and volunteer credible information that will lead to the arrest of criminals in the communities,” he said.