What a hardworking President! (Part 2) 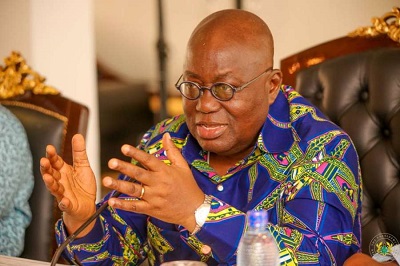 There is no doubt that in the light of his achievement, President Akufo-Addo has proved to be a leader who is very hardworking, is committed to what he stands for and is also prepared to leave for this country a list of achievements for the benefits of Ghanaians today and yet unborn.

We have already spoken about his achievements in a form of the free educational system, in digitalisation, in the health sector and remarkable growth in the agricultural sector. All these, put together, show that he is a great leader who must be emulated by all countries in Africa today. The opposition in Ghana have done all they can to vilify him, but he has always risen high above their evil intentions to serve his country to the best of his ability which is unparalleled in the history of this country. The discussion of his achievements will reveal that indeed he is a great leader, and that Ghanaians will have to retain his party, the New Patriotic Party (NPP) in power in 2024.

The Chief in the village of Berepro was faced with preservation of foodstuff in his community. The Chief and his elders thought about how to solve this problem, knowing that in previous times leaders who preceded him had not done anything meaningful to solve the problem. God being with him, this chief and his elders thought of traditional ways of preserving their produce and engaging in trade with the other villages around. Within a short time, the village of Berepro enjoyed better standard of living together with their neighbours.

Similarly, the government of President Akufo-Addo has done very well when it comes to promoting intra-continental trade in Africa. Until recently, many countries on the continent of Africa, were trading in larger volumes with countries outside the continent, while intra-regional trade was very low. African countries, realising this as a short-coming, have decided to come together and promote trade among themselves. This is what has led to the African Continental Free Trade Area (AfCFTA).

WHAT ARE THE OBJECTIVES OF AFCFTA?

First, it is to create a single continental market for goods and services and thereby accelerate Continental Customs Union. Second, it is to expand intra-African trade through better harmonisation and co-ordination of trade liberalisation and facilitation regimes. Third, it is to resolve the challenges of multiple forms of membership and expedite regional and continental processes. Finally, the Agreement seeks to enhance competitiveness at the industry and enterprise level through the exploitation of opportunities for large scale production, continental market access and better reallocation of resources.

One good move made by the President of the Republic is that he fought hard and negotiated with his colleagues for the headquarters of this noble programme to be sited in Accra. As we speak, AfCFTA headquarters is in Accra, bringing about numerous benefits to the country. First, it has raised the image of Ghana to a high level as a country that has set up and accommodate the AfCFTA secretariat.

Secondly, it goes to show Ghana as a peaceful and well secured country that must be trusted to accommodate the secretariat. Thirdly, all the officials connected to the secretariat will be based in Accra and indirectly bring in some revenue to the country. Fourthly, Ghana will also take advantage of the secretariat and conscientise its people on the need for making use of applicable standards in the production of goods and services for export to other countries on the continent. Furthermore, the local staff to be employed by the secretariat stands the chance of benefitting Ghanaians. This shows that Ghana stands to gain a lot for accepting to host the secretariat in line with the vision of President Akufo-Addo.

Fighting for the secretariat to be set up in Accra received very little opposition from other countries on the continent. This is because Ghana was seen as a beacon of hope for the rest of the continent. Several countries supported Ghana’s bid to host the AfCFTA secretariat and this did not come as a surprise when Ghana won the mandate to do so all because of President Akufo-Addo.

PLANTING FOR FOOD AND JOBS

In the agricultural sector, the President and his team introduced Planting for Food and Jobs as well as Rearing for Food and Export programmes. Also introduced was the One District One Factory concept and rolled it out in such a careful and vigorous manner that within the second and third years of his administration, the President had been able to produce a large quantity of foodstuff for consumption by the people of this country. Some of the food items were exported to neighbouring countries to feed the people there.

Neighbouring countries have been so enticed to Ghana that they are now rushing for the foodstuff available and today maize, yam, plantain and many others are running out of stock. What government must do in this case is to rigidly regulate the export of such products so that its own people will be fed adequately and be encouraged in their farming and farming-related businesses such as poultry so that the shortages can be curtailed to reasonable levels. Our neighbours must be fed but not to the detriment of Ghanaians.

Fruits like pineapple, watermelon and many others are being produced in various parts of the country under the programme and if things continue like this, Ghana will be a net exporter of food to the rest of the world as it is already doing, but of course not to the detriment of its people as has been pointed out already. Similarly, vegetables like tomatoes, onions, green pepper, garden eggs and others must be produced in large quantities so that people elsewhere can also benefit from such produce. In Demfefe in the Bono Region, for example, the 1D1F has set up Weddi Africa Tomato processing factory with 40,000 metric tonnes capacity. Here, 2,200 direct and indirect jobs have been created. It is not all the factories under the 1D1F that are agricultural in nature. Some of them produce non-agricultural products like garments.

In its wisdom, the government has been able to set up the Commodity Exchange which is helping to store the foodstuff produced so that they will not go bad within a short time since under the 1D1F, most of the factories established were agricultural in nature. The Commodity Exchange has helped to make food items available all year round. We should, however, not be happy with these achievements but continue to work hard under the programme, 1D1F, so that the best will be created for Ghana and Ghanaians for that matter.

Still on agriculture, much frantic efforts have been made in cocoa to increase output. Most of the cocoa trees were too old and had to be cut down to make way for new ones. Cutting them down required compensation for the cocoa farmers and this was provided by the government. Also, spraying of the cocoa trees as well as pruning were needed to energise the trees and make them produce more. All these have yielded positive results and today, Ghana has hit over one million tonnes of cocoa regarding production in that sector. Here too, kudos to the Akufo-Addo government and the Chief Executive of COCOBOD.

The programmes designed and implemented by the Akufo-Addo government is what as a country we would have to implement over the next decade or so to ensure that the country can begin to swim in greater prosperity than it is even doing now. We need to keep this in mind for a brighter future for all Ghanaians.