When Commission’s recommendations are blackened! 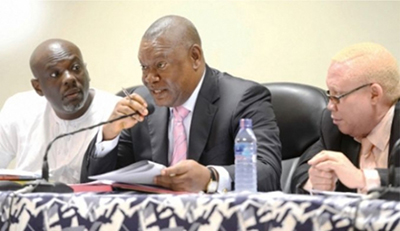 Ghana has had a googol of Committees and Commissions of Inquiry over the years.  And, it is exciting to see the rapidity with which such groups were put together.

Of course, there is absolutely nothing wrong forming a Committee or Commission to stage a ‘snake-pit’ inquisition into any supposed scandalous activity committed against the state.

Indeed, that is one of the practical steps to take to establish the truth or otherwise of a situation.

Most of the Committees put together are supposed to comprise of men and women of integrity and honesty whose image are always on the line and would stop at nothing to ensure they did a good, solid job.

Such personalities, most often than not, would hardly bend the rules – or dance to anybody’s whim and caprices.

It is sad to say, however, that we are becoming a country that is only animated with the swift formation of such committees, but are not really fascinated about the upshot of the painstaking days and months of sitting.

More painful and heart-throbbing is the fact that we spend tens of thousands of the tax payer’s money on committee sittings only to throw their reports and recommendations into the drain unashamedly.

It is bewildering. It is inconceivable. It is unthinkable. Why we do this as a nation is something that would continue to hound the minds of well-meaning Ghanaians, for many years to come.

Unmistakably, it is increasingly becoming palpable that such committees were only set up to, as it were, gratify the public. Or, you can also say, the authorities were only trying to play the ‘Russian Roulette’ by forming the committees.

As we speak now, there are quite a number of such committee reports and recommendations gathering dusts at the Ghana Football Association (GFA), the Ministry of Youth and Sports (MoYS) and the National Sports Authority (NSA).

Indeed, you do not have to stretch too much to point to a couple of them in recent times including the Maputo 2011 All Africa Games Committee that recommended for the prosecution of certain individuals enmeshed in financial impropriety.

Question is, why do we decide to splash the tax payer’s hard-earned cash on such Committees and Commissions, all-too aware that we are going to take their recommendations with a pinch of salt?

Many people indicted by such committees have gone scot-free with all their ‘ill-gotten booties’ because the ‘damning’ recommendations have been gum-booted into the abyss.

For how long are we going to tread this disturbingly agonizing path? Forever?

God have mercy on us!