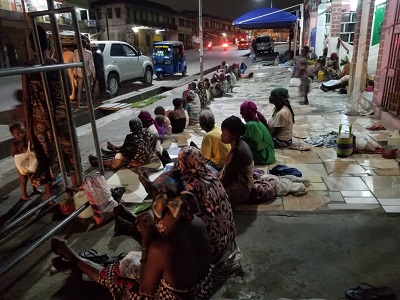 Residents, especially those close to the Kumasi Central Mosque, have heaved a sigh of relief following the departure of migrants from the pavements along the mosque.

The migrants, mainly females and children from Niger, had occupied the pavements along the mosque and had turned the place into their permanent place of abode.

They were said have started trooping in from 2018 with their numbers increasing in the latter part of 2020.

They washed and hanged their clothes on the fence wall of the mosque much to the chagrin of worshippers, who complained but to avail.

This paper, on November 27, 2020, published the story of a female Nigerien migrant, who attacked a Mallam at the Central Mosque over a sleeping place.

The woman, in the story, threw decency to the wind and pounced on one Mallam Gariba Borga, for denying her space.

Following this and other publications about the inconvenience the migrants posed to residents, the police at about 10:00pm last weekend carried out a monitoring exercise in the area.

But there was drama when the migrants, upon seeing police vans, took to their heels leaving behind their belongings. Some of them including nursing mothers ran helter-skelter to avoid any arrest, although the police were not there necessarily to arrest them.

The mere visibility of the police in the area has, to some extent, brought sanity to the area as a number of the migrants have vacated the pavements.

It was not clear where they had moved to but some children belong to the settlers are still seen along the streets of Amakom begging for alms.