Any help for Abu Imoro? 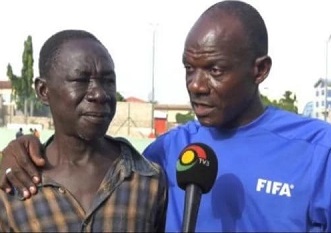 The name Abu Imoro may not ring a bell to many of today’s domestic football followers.  Interestingly, ever since Abu hanged his boots, we have not had any player by that name in the national premier league. One stands to be corrected on that assertion though.

Even if we had it on our blind side, that player may not have glittered to win the hearts of many, particularly in the 80s and early 90s, as the REAL (cap mine) Abu Imoro did so naturally and effortlessly.

Of course, he may not be a player of the first water, but his poise and confidence on the ball coupled with a crazy obsession to strip bare the most-feared players, was always a gorgeous spectacle.

Indeed, he was a sweet blend of ruggedness and adroitness; but not extremely flamboyant in his midfield role. With his sturdy and solid frame – robustly recognised by a ‘fiery’ face, you need to possess some incarnated physical ability and brains to disarm him of the ball.

That is not all; aside from being a ‘spoiler’ particularly in midfield, his supreme ability to control an aerial ball on his chest – regaining his balance and pirouettes early enough to tame it onto his feet, easily makes him the crowd’s favourite.

Abu first played alongside football legend Abedi Ayew Pele at RTU in Tamale, before coming down south to feature for Great Olympics.

According to the President of the Sports Writers Association of Ghana (SWAG), Kwabena Yeboah, the story of Abu Moro cuts bones – describing him a huge talented star.

“I remember him vividly when we went to Liberia in 1987 for the SCSA Tournament. My goodness, he was something else. Indeed, Abu was mainly the reason Ghana won the trophy beating Liberia 2-0 in the final with George Weah and James ‘Salinsa’ Debbah, then featuring for the Lone Star.

“Hopefully, the media spotlight will bring some redemption,” he remarked.

Forlornly, the Accra New Town-born Abu Imoro did not blow out or mushroom into the kind of player Ghanaians had hoped for as he regrettably got hooked into drug addiction that eventually tore him up and left him staggering into poverty.

Today, the former midfield dynamo still reels from the ‘bad side’ of his past and survives solely on the benevolence of friends and loved ones.

On many occasions, he had been supported by former teammate Abedi Pele and other sympathisers with regard to rehabilitation. Sadly, Abu is always quick to go back to his ‘vomit’ anytime his situation appears to improve.

Indeed, if you set eyes on the player, known in Ghana football as Tigana (named after the great French midfielder), you might break down in tears – after recollecting his halcyon past.

Before he got ensnared into hard drugs, Abu had his own house, car, wife and children. When things got out of hand, the wife had no choice than to leave.  His house and car were reportedly sold and his riches all evaporating into thin air with the speed of lightening.

On hearing his latest plight, some of his contemporaries and other ex-players of Great Olympics including George Alhassan, Godwin Attram, Isaac Acquaye, Awuley Quaye and John Naawu, last week paid him a visit to solidarise with him.

At present, Abu is looking for a new window of opportunity to turn a new leaf. He says he wants the nation to help him get over his drugs life. He pleads earnestly!