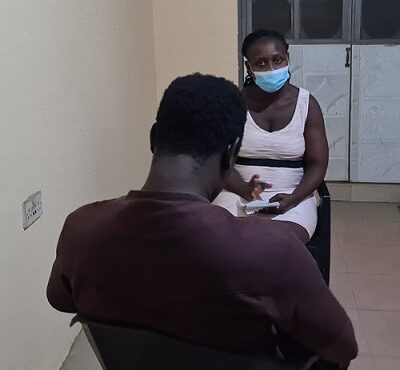 Imagine paying a significant amount of money to a Travel Agent to take you from Ghana to Dubai and also get you a job only to get there to shockingly realise that your Agent hasn’t made any provision for your transportation even from the Dubai Airport not to talk of accommodation or a job.

That was what happened to 29 year old Business Man, Bright Mawuli in December last year.

In an interview with The Spectator on Wednesday to caution the youth to be wary of deceptive Travel Agents, he said he couldn’t believe he had been swindled as he stood helplessly at the Airport in another country.

His dream of going to Dubai to seek greener pastures by working with a transport company had obviously been crushed – for hours he said he did not know what to do.

According to him, the Travel Agent had given him the impression that every paper work had been finalised and the job was a done deal “but I got to the airport and the Agent wouldn’t even pick my calls” he said.

Mr. Mawuli said some concerned Ghanaians in Dubai helped him to leave the Airport and even took care of him for a while.

“I later realised that I was not the only victim. There were over 150 Ghanaians who had found themselves in that situation with no means to stay there or come back home” he disclosed.

He said many Ghanaian youth and other nationals were stranded in Dubai and sleeping on the streets.

“They spread their cloths and use their bags as pillows. We call such people “Agent Rejected “, he said.

The victim said the turn of events got him “depressed and traumatised ” because he could not believe he had been defrauded and the thought that it was a helpless situation made him feel sick.

He said upon interaction with other Ghanaians he found out that some Travel Agents had processed fake documents for unsuspecting clients only to put them in a terrible situation.

“You will never know an Agent is fake until you become a victim. In fact, some Ghanaians who do not even have legitimate documents claimed to be Agents there “describing the state of affairs as wide spread.

He questioned how a person could give what he or she did not have.

Mr. Mawuli said but for some friends who were constantly encouraging him that everything would be fine, the development could have affected his mental health.

He recalled some occasions, he couldn’t afford food and had to starve for three days.

When asked whether he intended taking legal action against the Travel Agent who defrauded him, he said he had decided to leave everything to God.

He advised people who desired to travel outside for greener pastures to make sure that a thorough background check was done about the Travel Agency and their staff before making payment.

“Do a comprehensive research about the company where you have been promised that you would work there. Trust your instincts and also pray over and over about your decision to travel because all fingers are not equal” he cautioned.

MrMawuli said that sometimes considering the amount of money people paid to Travelling Agents, it was best to start something in Ghana instead of travelling.

He has, therefore, made a passionate appeal on behalf of the many homeless Ghanaian youth in Dubai to the Government and public spirited persons to help in evacuating them back home.

“Many of the people in Dubai who have been duped by Travel Agents wish to come back home but do not have the means. I will be glad if they could get help to do so” he said.

Mr Mawuli said he was fortunate to come back home because he got in touch with a Social Media Influencer called Nana Tea who facilitated his coming home with the help of some good people recently.

He currently drives an Uber for a living, hoping to get his life back on track.