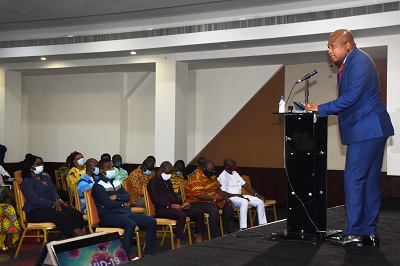 The opposition National Democratic Congress (NDC) has shot down claims by the ruling government that it has achieved 78 per cent of its manifesto promises since assuming office in 2016.

In what it terms a thorough analysis and scrutiny of all 631 promises made by the New Patriotic Party (NPP) in the round up to the 2016 elections, the NDC scored the government 14 per cent in terms of delivery.

“We have discovered that the NPP made 631 promises and not 388 as the Vice President put out and after thorough analysis, combing through documents and what they have told us in Parliament, it will shock you to realise that only 86 out of these 631 promises has been delivered, so, the percentage achieved is 14 per cent and not 78 per cent as they claim,” Member of Parliament of North Tongu, Samuel Okudzeto Ablakwa asserted.

In a sector by sector presentation themed, “NPP 2016 manifesto in perspective: claims, deception and reality,” the MP contended that “claims of achieving 78 per cent of their promises is a scam and per what they have done, we are generous to score them an F.”

Vice President, Dr Alhaji Bawumia at a town hall meeting in February this year had indicated that despite inheriting a challenging economy from the NDC, the NPP had tackled the challenges head on, delivering 78 per cent of its manifesto promises.

“In all, we made 388 promises in our manifesto. The most recent validation exercise at the end of January 2019 shows that we had delivered or are delivering on 303 (78 per cent) of the promises and we are on course to do even more,” he declared.

But giving further breakdown of the NDC’s assessment of the manifesto, Mr Okudzeto cited for instance that in the agricultural sector, of the 74 promises made, only 13 had been delivered with 61 (82 per cent), outstanding.

The Ranking Member on Parliament’s Foreign Affairs Committee among others singled out promises on the “one village, one dam” policy, export of horticultural crops, restoring and restocking the Korle Lagoon with fish as well as restoring cocoa production to over one million metric tonnes per annum, where government had failed abysmally.

On the economy, the opposition claimed that the high cost of doing business in the country coupled with botches in maintaining fiscal discipline, achieving double digit gross domestic product (GDP) growth annually, reducing government borrowing among others, has seen the NPP realising only 27 out of 45 promises made in the sector.

The NDC rated sectors like Chieftaincy and Culture, Local Government and Rural Development and Youth and Sports, zero with the others performing dreadfully contrary to promises made in the NPP manifesto.

Mr Ablakwa, described the promises delivered by the NPP as “face-saving theories” insisting that, “Ghanaians measure results and not efforts.”

He thus used the occasion to hint of the NDC 2020 manifesto which would be outdoored in coming days calling on the electorate to count on the party to deliver on its manifesto should they win power in the coming elections.

Meanwhile, the NDC launched a website, www.nppfailedpromises.com, to help Ghanaians fact-check the promises of the NPP government.